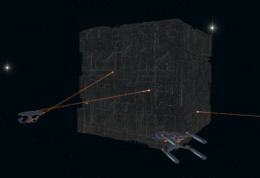 In State of Q the player's starship is sent to escort a survey ship in Borg space, which leads to an encounter with the infamous Q.

The U.S.S. Copernicus is surveying the Alini System, but Starfleet isn't comfortable sending a lone survey ship into space where the Borg have been sighted.

Captain Cassini might need some help. Would you be willing to go to the Alini system as an escort for the Copernicus?

Go to the Alini System, located in the Gamma Orionis Sector Block, and help the U.S.S. Copernicus.