Mission: Out in the Cold

Out in the Cold 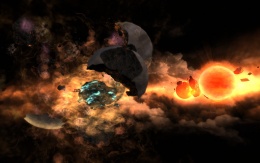 In Out in the Cold the player rescues Deferi slave workers from a hidden Breen dilithium mining facility.

In the VZA-4001 System the player rescues the freighter Sabok from attacking Breen slavers. The Sabok Captain immediately leaves to reach her destination before the Breen do. The Sabok's sister ship Paktau is also in the system and is calling for emergency repairs. After an engagement with the Breen, a warp core breach is imminent. After the replacement parts are beamed over to the Paktau, sensors pick up more Breen forces to enter the system. The player has to defeat these reinforcements to allow the Paktau to repair and leave the system safely. The Paktau Captain tells the player, that the Breen slavers were talking about the Zaria System, suggesting, that the kidnapped Deferi were brought there.

In fact the Breen have installed a mining facility to harvest the dilithium of Zaria's core. Several Breen ships are patrolling the cracked remains of the planet to secure the hidden operation. After the player fights through these forces, the bridge crew realizes, that the Deferi cannot simply be beamed up from the mine, since a transport disruptor field is in place. The player beams down to the mine with an away team to rescue the Deferi workers.

The Deferi are held in an array of holding cells. The player fights through a series of Breen guards to disable the transporter inhibitors. After the Deferi have been beamed aboard safely, Thot Trel calls the away team, introducing himself as the commander of the Breen forces attaking the Deferi. He dispatches Thot Gran, the commander of the mining facility, to kill the away team. After defeating him, the player leaves the facility.

Surah is thankful for the player's actions and allows the player's faction to join the Deferi in mining the Dilithium from Zaria in the future.

We have lost contact with two transports en route to the outer colonies. There were more than 400 Deferi on those vessels, and with the rising threat from the Breen I fear the worst. Their last known location was near VZA-4001, and I suggest that you start your search there.

The Breen have no compunction against attacking civilian ships. We seek peace with the Breen, as we do with all beings, but they answer our offers of friendship with death and destruction.

Find our ships. If there are any survivors, please bring them home safely.

Go to VZA-4001, which is in the Defera Sector of the Alpha Quadrant, and search for missing Deferi transport ships.