In The Longing the player investigates a colony facing the imminent threat of assimilation by the Borg Collective.

A Starfleet Exeter-class starship witnesses a battle between the U.S.S. Mayflower and a Borg scout ship over planet Noro IV.

The player is sent to the Noro System in the Gamma Orionis Sector as a relief for the U.S.S. Mayflower. The ship has been badly damaged by a series of Borg scouts, trying to invade the planet Noro IV. The Mayweather has successfully prevented Borg to land on the planet, where Federation settlers have established the New Nagasaki Colony. The motivation for the Borg to come after the colony seem to be silicon-based life signs originating from the vicinity of the colony. Since the Mayweather is in no condition to engage another wave of Borg, Captain Lucia Petrelli takes her ship back to Battle Group Omega.

The player beams down to the colony with an Away Team in order to prepare the colonists for evacuation. However, Governor Donovan McGruph is not willing to give up the colony and formally requests the player to assist the colonists to defeat the Borg invasion. Unable to provide sufficient firepower to effectively protect the colony, the player's Bridge Officers devise an alternative plan: Hiding the unusual life signs from the Borg sensors, thus rendering the planet uninteresting to the collective.

McGruph agrees, and the player confers with the colony's chief technician Benathan Velligan to construct a sensor screen from parts of the colony's environmental control system. Velligan informs the player that the necessary phase discriminators were destroyed when the system was struck by an ion storm, hence the sensor shield cannot be constructed. Interestingly, the Away Team's tricorders pick up what appears to be a phase discriminator close to one of the silicon life signs.

When the Away Team reaches the signal, it turns out the phase discriminators of the environmental control system are in working condition, and in fact are responsible for generating fake readings of silicon life forms in the first place. The player deactivates several of the devices, which are scattered in the woods close to the colony.

When confronting Velligan about the fake signals, he confesses to have setup the devices intentionally for the Borg to come and assimilate him. He reveals to be an El Aurian refugee who seeks reunification with his assimilated wife. With the fake signals deactivated and Velligan exposed, the colony is relatively safe again. McGruph promises to take care of the troubled technician. 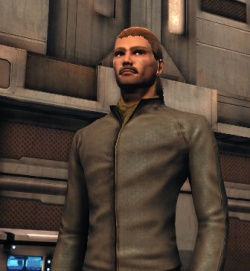 The player interfaces with the subspace-interlink of a fallen Borg drone, but the command path is protected by a series of lockouts. To find the correct command path sequence, the Away Team searches for other fallen drones and extracts their latest orders from the collective from their neural processors. After the sequence has been entered correctly, the drones disable the force field and the away team reclaims Main Engineering. That is, when bridge duty officer Lt. Geltan asks for help. The Bridge is under siege by Borg boarding parties.

Using the turbolift, the Away Team reaches the Bridge in time to repel the Borg. Using a disruption field, the ship is temporary safe from being boarded. The remaining Borg are beamed off the ship using the transporters. The player retakes the bridge.

In the mean time, a sizable force of Borg ships has reached the Noro System. Governor McGruph sends an emergency signal to the player's ship, explaining that Velligan had managed to reactivate one phase discriminators, resulting in the Borg invading the planet. Realizing that the Borg cannot be defeated, he agrees to the evacuation of the colony. The colonists are transported off the surface, but Velligan is missing, obviously abducted by the Borg.

The ship is too close to the planet's atmosphere to engage Warp drive and must fight through the Borg armada. Finally, the ship is hailed by a Borg Cube. A drone, identifying itself as Hastatus of Borg is demanding the ship to stand down and lower shields for assimilation. It is Velligan. The player has no choice, but destroy Velligan's Cube and leave the system before even more Borg ships arrive.

New Nagasaki, a Federation colony in the Noro System is under siege from a Borg fleet.

We have no idea, why the Collective is engaging the settlement, since it is of no strategic importance and the settlers’ technology is relatively antiquated. I was certain, that we would have way more time to evacuate the planet.

But now academic discussions won't get us anywhere, will they? The Borg want to assimilate that world and we need to stop them. The U.S.S. Mayflower is already there to assist, but I'd like to add the <shipname>'s firepower to the colony's defense.

Go to the Noro System in the Gamma Orionis Sector Block and defend the New Nagasaki Colony against the Borg.