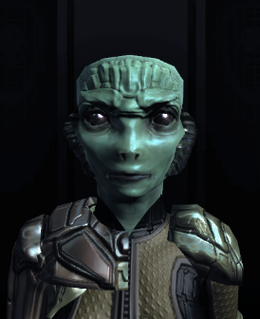 Zara Dren is a Xaraxian Civilian Specialist working for Starfleet in the west wing of Memory Alpha.

Although not being from the Federation her work allows her to study the member species and the anomalous data brought to her by Starfleet officers. Dren identifies herself as a specialist in exobiology but she is also apt at archaeology, astrophysics, quantum chemistry, and zoology, holding the equivalent for Federation doctorates in these scientific disciplines. In addition, she is an envoy sent by the Xaraxian Congress.

Hoping to build bridges between her people and the Federation with her presence, Dren accepted the offer to work at Memory Alpha made by the Federation Science Council towards Xaraxian scientists when diplomatic relations with the Federation were initiated.