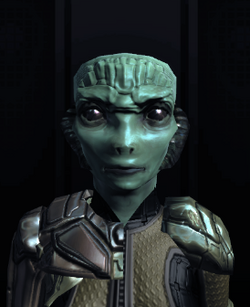 Xaraxians are a humanoid race from the Alpha or Beta Quadrant. As of 2409 they are not members of the Federation. Their government is called the Xaraxian Congress.

Xaraxians are an hairless reptilian species with a humanoid stature. Like Saurians, their females possess mammalian features such as a pair of breasts. The lower portion of Xaraxian faces resemble the Saurian's, too. The nose bridge is wider compared to common humanoid, hence the eyes are positioned further away from each other. In addition, the irises are dark grey and cover the entire eyeballs. Coral like ears are attached to the side of the head and the forehead features vertical ridges running parallel from the front part of the head down to the pronounced eyebrows. The skin is pale green but as only one member of this species is known, Xaraxians may feature much more diversity in skin colours.

If Zara Dren is exemplary for her species, then at least scientifically an individual is extremely versatile compared to Human standards, holding degrees in several different disciplines.