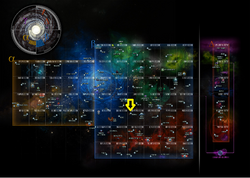 There are more than 20 micronebulas in the Xarantine system, at least three of which contain protomatter. Because of this, the system has frequently been contested, and was occupied by Jem'Hadar forces during the Dominion War.

The Xarantine government, while officially remaining neutral, has recently agreed to give Starfleet full and open access to its space.

The Xarantine system is home to a spacefaring civilization which was frequently raided by Klingon forces in the 22nd century. As the Federation grew and became a rival to the Empire, the Xarantine allied themselves with the former and hosted Starfleet drydock, sensor and defense facilities during the 23rd and 24th centuries. During the Dominion War in the 2370s, the system was occupied by Jem'Hadar forces, and, in the 2380s, became the site of a large battle against the Borg.