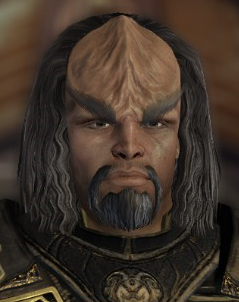 Worf is a Klingon Ambassador and gin'tak to the Great House of Martok. He is the father of Alexander Rozhenko and K'Dhan, the husband of Grilka, and brother to Kurn.

Once a highly decorated Starfleet officer, Worf served as Lieutenant and Lt. Commander on the U.S.S. Enterprise-D under Captain Picard and on Deep Space 9 under Benjamin Sisko. After the Dominion War, he became Federation ambassador to the Klingon Empire on Qo'noS.

In 2385, Worf resigned his Starfleet commission and begins to pursue a relationship with Lady Grilka, marrying her the following year. He tried to mediate between the Federation and the Empire to prevent the upcoming war.

After the destruction of the Hobus star in late 2387, Martok, Chancellor of the Klingon High Council, appointed Worf to the rank of General in 2388. He attempted to stop the Romulan Nero and his Romulan/Borg technology hybrid ship Narada. However, the Narada destroyed the Klingon forces. Leading a Klingon boarding party, Worf was critically injured, but was rescued by the U.S.S. Enterprise-E under Captain Data. While recovering on Vulcan, Worf was attacked by an Undine agent attempting to replace him; Worf was able to repel the attack, but retained no memory of the battle itself. Worf's defeat weakened Martok's position on the High Council, since Worf was still regarded a Federation outsider by many Klingons.

Despite his best efforts, Worf was unable to prevent the Klingon Empire from going to war with the Gorn Hegemony in 2399. In 2401, Worf was part of a contingent of retired and current Starfleet officers, also including Admirals Kathryn Janeway, Beverly Crusher and Chakotay, as well as retired Captains Ezri Dax and Tuvok, who all appealed to the Federation Council to reconsider its position on the Klingon-Gorn War and to support the Klingon Empire. In protest against the Council's refusal to assist the Empire and subsequent condemnation of the war, Worf cut his ties with Starfleet and returned to Qo'noS.

At the request of Drex, son of Martok, General Worf took the position as gin'tak to the House of Martok in 2405. Thus, he would advise Drex in his struggle with the House of Duras that was supporting Chancellor J'mpok. 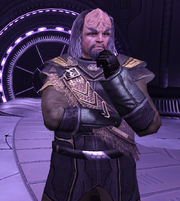 Worf on a Solanae station 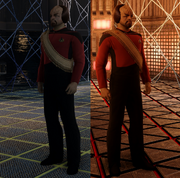 Holographic representations of Worf as he appeared in 2364