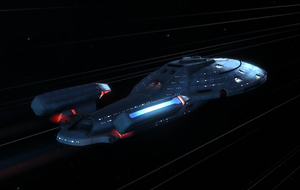 The visual effect of entering and leaving warp can vary by faction; notably with DSC Starfleet characters having a warp effect based from visuals on Star Trek: Discovery. Separately, certain ships have an animation on entering warp, for example the Intrepid class raising its nacelles. Unique animations can also extend to transwarp, with the Crossfield-class having a unique animation and visual effect for transwarp.

A warp core breach occurs approximately five seconds after a starship's structural integrity drops to zero, inflicting AoE damage to any ships within a few kilometers. The size and power of the breach depends on those of the ship.

In starships that use antimatter warp cores, the fatal blow will be followed by numerous internal explosions, after which the vessel will explode in a bright flash.

Vessels that use singularity warp cores (most ships used by the Romulan Republic and the Star Empire) will collapse into a temporary black hole. The singularity will draw nearby vessels toward it until it explodes a few seconds later.

The different breaches appear to inflict the same amount of damage regardless of visuals, but the singularity explosion is also accompanied by a considerable knock-back effect.