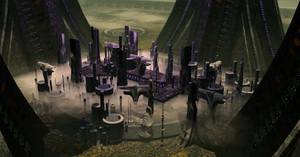 The Voth Battlezone as seen from space

The Voth Battlezone is a ground adventure zone located in Solanae Dyson Sphere's Contested Zone. Dyson Joint Command calls on ship captains to assist in their battle against the Voth, which launched a massive attack on the Omega Particle Silos located there.

This is the Voth Battlezone.
Our goal is to take control of at least one Omega Particle Silo. Here' how we do it.
This is the map of the battlezone. There are three regions, each made up of multiple capture points. When the Voth hold a capture point, it is red. When we take control of a captured point it will change to blue. Capturing points advances us towards our goal, represented by this meter. When it is full, we can make our final push to stop the Voth at the Omega Particle Silos. We must capture at least one of these silos to claim this battlezone for the alliance.
Good luck.

The zone can be accessed from 3 locations. 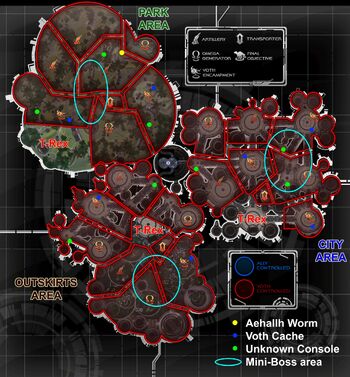 A mix of rural and urban landscape.

The Voth Battlezone is divided into three regions; each region has eight zones. There are three types of points which can be captured to advance the Battlezone Ally Control meter:

Once enough zones are captured, and held, the end phase will be triggered:

For each captured point, players will receive 10

.
After capturing a point, Battle Zone Command Credits will spawn all around the area. They can be picked up by the players and used to summon Alliance reinforcements which will protect the captured area from ongoing Voth attacks.. In exchange for summoning the reinforcements, players will receive

For each defeated V-Rex, players will receive 25

Completing the battlezone will give out a zone-wide reward based on how many final objectives were completed.

Following accolades can be obtained in the Voth Battlezone: