The Voth are an ancient civilization in the Delta Quadrant. Their culture dates back twenty million years and relies on strict adherence to Voth Doctrine or simply "Doctrine". Questioning Doctrine is considered heresy and punished harshly by the ruling Ministry of Elders. The Doctrine is called into question by scientists finding evidence for the Distant Origin Theory, which posits that the Voth evolved on Earth. Whether the Voth have a homeworld in the Delta Quadrant is currently unknown.

Voth are a humanoid reptiloid species that presumably descended from the Hadrosaurid Parasaurolophus, extinct on Earth since the Late Cretaceous era, roughly 75 to 65 million years ago. The Voth have retained the crest extending from the back of their head. Smaller Voth have shorter cranial crests than their bulkier counterparts. The largest Voth stand taller than most humanoids and rather compare with enormous Breen like Thot Trel, or the most massive Gorn Ra'wiq and Hodch. They also have the ability to deploy spines from their forearms which are laced with a paralytic toxin, though this ability is rarely used.

A Klingon Defense Force intel report on the Voth 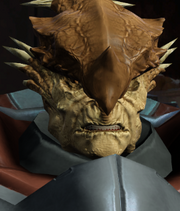 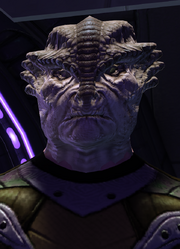 Despite being known for their technological superiority, Voth suffered a heavy defeat at the hands of Vaadwaur.