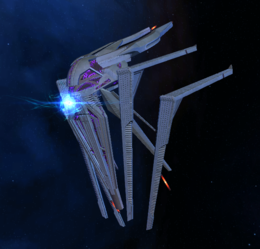 Vonph Battleships are massive Iconian battleships operated by the Heralds during their invasion of the Milky Way. They are often used as capital ships during fleet actions, and also tasked with defending Iconian installations in contested space.

It is a truly fearsome starship, its colossal size coupled with its combat capabilities make it rightfully feared by members of the Alliance. The Vonph is slow to maneuver, but is incredibly durable and versatile.