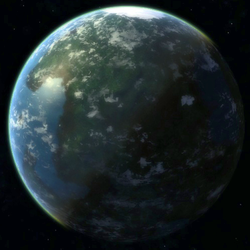 Virinat is the primary planet of the Virinat System and - until 2409 - the site of an independent Romulan colony.

Virinat was originally an agricultural colony, growing food for the Romulan Star Empire. After the destruction of Romulus in 2387, thousands of refugees flooded the planet, which the colony was unable to accommodate causing major damage to the settlement. Most of the refugees left, and the remaining colonists decided to try to rebuild.

Around 2399, a T'liss Light Warbird commanded by Malem entered orbit, looking for a place to call home. He and his crew decided to stay on Virinat, and contributed greatly to the welfare of the colony. Malem became the Maiori, Nevala the head of security, and D'Vex the chief engineer. The colony has prospered since then, and every year a festival called the Tapping is held to celebrate what has been achieved.

Unbeknownst to many of the Virinat colonists, Maiori Malem maintained covert communications with D'Tan, figurehead of the Romulan Republic, who provided the colony with vital water reclamation equipment, and smuggled ship parts to the colony. In return, the colony's engineers provided repairs to damaged ships from the Romulan Flotilla.