The logo of Victory is Life

Victory is Life is the fourth expansion for Star Trek Online, which focuses on Deep Space 9 and the Gamma Quadrant, released on June 5th, 2018 for PC and July 24th, 2018 for Console. The expansion features actors, locals and lore from throughout the series Star Trek: Deep Space Nine which celebrates its 25th anniversary in 2018. 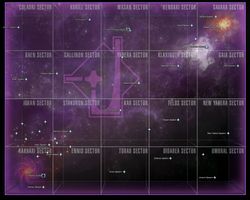 Map of the Gamma Quadrant.

The Gamma Quadrant is the final galactic quadrant to be added to Star Trek Online, it includes various locations from Star Trek: Deep Space Nine. It is accessible through the Bajoran Wormhole at Deep Space 9.

A new faction, the Dominion, will be added with Victory is Life. Jem'Hadar characters from this faction will start at level 60 and move to level 65, possibly being expanded later on.

Jem'Hadar characters created from June 5 to July 18, 2018 were eligible to participate in the Gamma Recruitment event. [1]

The following missions are part of the Gamma Quadrant Battlezone:

Completing 10 of these will unlock a final invasion:

With Victory is Life, the level cap has been increased to Level 65. Each level will unlock the following perk for your character:

Alongside the level cap increase, items can be upgraded to Mark XV.

The Star Trek Online story continues with Victory is Life, including a new story arc, the Gamma Quadrant.

This includes the unique intro to the Dominion faction, "Engineered for War":

Following the events seen in “Scylla and Charybdis”, representatives from all major factions come together to discuss the renewed Hur'q threat.

As well as a set of new faction-agnostic missions as part of the Gamma Quadrant episode:

In several early missions, characters were replaced by the new voice actors.

In addition, most Cardassian and Jem'Hadar NPCs were redesigned including Kar'ukan and Kardek.

The Deep Space Nine ground map has been completely replaced with a new one that more faithfully matched what was seen on TV, built using the actual plans from the Promenade set. The exterior model for Deep Space 9 was also replaced with one that more faithfully matched the filming model used in the television series, created by modeler Tobias Richter.

The following ships were already present in-game, but they became available once more with the Gamma Vanguard Pack as account-wide unlocks.

Victory is Life adds new species to the game:

Romulan players will now have access to Tier 5 and Tier 6 ships of their chosen ally, save for the following ships: