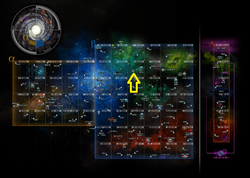 The Vendor System is a system located in the Vendor Sector of the Beta Quadrant and is home to Vendor Station.

A Romulan colony world near the neutral zone, Vendor II is a M-Class world with a population of approximately 47,000. Many of the residents are family members of Romulan military officers who serve on the space station orbiting the planet.

Access to the station is severely restricted, and several members of Starfleet's Romulan Task Force have expressed an interest in learning more about what is happening there.

The Vendor System is a binary star system and home to three planets, one of which is home to the Vendorian civilization. Their homeworld was quarantined by the Federation, as the Vendorians were deemed to be still psychologically unfit for involvement in the interstellar community, due to their practice of deception and shapeshifting.