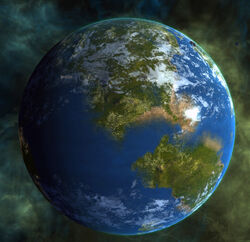 Vega IX is the ninth planet of the Vega System and site of the Federation Vega Colony.

As of 2409, Vega Colony is home to more than 2.8 million Federation citizens. The colony's administrator is Willa Post; other known current or former residents include Kolez, as well as Cpt. Va'Kel Shon and his family.