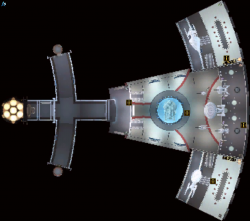 Due to the shipyard’s destruction in Star Trek: Picard, it is unknown if the shipyards will be removed from the game.