Hey people! I have a little problem and I would like to ask for some help with this. I have a screenshots of a planetary system but I have no idea what system it is from. It is most likely from a system patrol mission, but I'm not certain. It is also most likely in the Sirius or Regulus sector blocks. Can anyone help with identifying this system? Thanks! Drew 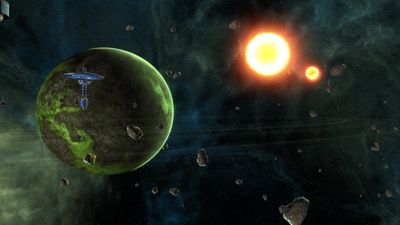 A binary system - cool! Unfortunately, I don't know which system this is, maybe the Celes System, but I will look for it and tell you as soon as I find it! (BTW, I allowed myself to make the image a bit smaller. I hope that's okay.) --Markonian 04:37, 11 April 2011 (UTC)

I've noticed you have been fleshing out system articles. Thanks a lot, we need to get them done badly (really a shame we have not all of them in, yet). One thing I'd like to ask you is to adhere more to some general guidelines so we don't create inconsistencies:

No, thank you for all that you do here. Especially the seemingly constant and unrecognized efforts to help clean up behind well-meaning but ignorant souls such as I. :) --Ithaqua 21:06, 10 November 2011 (UTC)