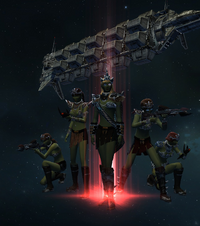 Tahno is the character I play the most. She is a former Orion slave who managed to impress the Klingon High Council enough to offer her a commission in the Klingon Defense Force, but she still maintains her Orion Syndicate ties.

Tahno and her sisters were always rebellious and often faced severe punishment at the hands of their cruel master until finally they could take no more and made their plans to escape.

Tahno was to be presented to a Klingon Captain to whom her master owed a favour, and insisted that her sisters come along to entertain the crew. Together they used their seductive powers to fool the Captain into parting with his ship.

The Klingon High Council laughed heartily when the Captain finally faced them to tell of his dishonor and commissioned Tahno into the Klingon Defense Force, remarking "The Empire could use a warrior like her!".

Now she roams the galaxy, with her sisters, making their living as mercenaries and pirates, as all good Orion do. Over time, her crew has grown to include not only Orions, but also Reman, Breen, Jem'Hadar, an Andorian, and even former members of the Borg Collective.

Together they fight for the Empire, standing united against oppression and bringing justice to those who would otherwise enslave them.

Tahno's younger sister, Chiyana Storm is a Commander in the Klingon Defense Force, serving with her sister as Chief Engineer.

The youngest of the three, Commander Nesmi Storm is Chief Medical Officer, and Tahno and Chiyana's baby sister.

Originally hired for her skills with a weapon, R'Shanee Vela has become a trusted friend and First Officer in Tahno's crew. Her role as Chief Tactical Officer is well suited to her skills. She is often the first member of the crew to volunteer for away missions, but her shipboard responsibilities sometimes see her commanding the bridge or at the tactical station in control of the weapons systems.

Engineered by the KDF from research and equipment taken in a raid on a Federation Research facility, Soolan is an experimantal positronic android, currently undergoing evaluation for use in the KDF military. She was created based on on-going research into the work done by the Starfleet Corp of Engineers after the discovery of the original positronic andriods, many years earlier.

Tahno spends more time in her Tuffli Class Freighter than any other ship. I'ts great for Duty Officer assignments, especially the Renown chains, due to its Transwarp abilities, and in addition to Bank, Mail, and Exchange, it also has a discount Commodities Vendor, which helps with all those Reputation and Fleet projects.

The name means "in the distance" or "so far away", inferring that by the time you've seen her, she's gone! As an Orion Pirate, Tahno isn't above a little smuggling when the opportunity arises, and like most ships fit for the task, her Freighter is rigged for speed, traveling at up to warp 22 in sector space (31.5 in Slipstream). Her sister Chiyana has improved Transwarp Drive efficiency by 73%. With just 4 minutes required between jumps, the ship is rarely seen traveling in Sector Space.

If she's not flying her Tuffli, she will be in her Peghqu' Heavy Destroyer'. It combines the strength of a cruiser, with the turning circle of a raptor, and can be very effective in battle.

These are reminders to obtain Accolades, Duty Officers, and other achievements which do not prompt in-game.