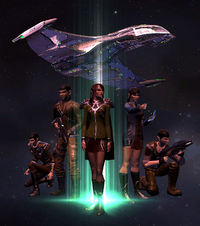 T'Rina Vehal, known to most people simply as Rina, was once a simple farm girl, tending crops on Virinat, but she always dreamed of more.

T'Rina was just six years old when her family was forced to find a new home. Surviving the supernova, they settled on Virinat where they began to rebuild their lives, but building a homeworld is not for everyone, especially a young girl. Bored of the farm life, Rina had once tried to buy passage on a passing freighter. When the Tal Shiar came, she quickly found herself in the midst of something exciting and joined the Republic, ready to fight for her people.

Having never been far from her family, the first time she met an off-worlder was at Khitomer. The Federation seemed so boring and regulated, while the Klingons were strong and exciting but soon after choosing sides she found that marauding and pillaging left her with an uneasy feeling.

The discomfort she felt working for the Klingons was nothing compared to how she felt about working undercover with the Tal Shiar. All she could do was think of the bigger picture and put her feelings aside to get the job done.

Thirel (3Rel) is the third release of the Soong Foundation's experimental android model XA-27. She has been carefully engineered from schematics which have been derived from the original reports produced by the Starfleet Corp of Engineers, based on their research into the original positronic andriods, discovered many years before.

Six is a Liberated Borg Klingon, who as yet has no Bio.

When Rina heard about plans for the Ar'Kif Tactical Carrier Warbird Retrofit she reserved one of the early prototypes, sending it back to the New Romulus Shipyards as soon as the hangar bay upgrades were in production. The Focused Singularity Modulator Console gives it abilities similar to the Daeinos Heavy Destroyer and with its sister class, the Ar'kala sporting a compatible Quad Cannon Rina pulled a few strings to have these integrated into the weapons array, along with an Enhanced Plasma Infuser. You don't get to be a Lieutenant General without having a few friends in high places.

The name means "Avenger" in the Rhiansu tongue and is inherited from a long line of successful Warbirds of the Romulan Star Empire. Representing a new beginning, but honoring the ships which served in the past, she is the first ship of the Romulan Republic to bear this name.

Named after club in the Orion Stronghold on Nimbus III, this Daeinos Heavy Destroyer has been a faithful workhorse since its launch, and is still a valuable asset but improvements in technology have seen it reduced to a secondary role, providing support rather then being on the front lines.

This is a Commander's Gig small craft. It's fun to fly and its ability to carry an extra device gives it a slight edge if forced into battle.