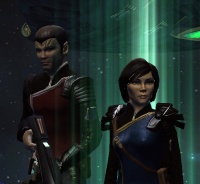 Rukia Kuchiki is a Human Commander in the Romulan Republic Navy. She is a survivor of the Xindi attack in 2153, and the Virinat colony attack in 2409. She was formerly commanding officer of the starship R.R.W. V'tal K'ihai, which participated in the Elachi conflict and the Iconian War.

Rukia's original birthdate is estimated to be in 2134 on Earth, but no birth documents could be retrieved. Rukia's only known family member was a woman named Hisana, who was her biological sister. Rukia gained a father-in-law when Hisana was married to Byakuya Kuchiki. After the wedding, official documents record the small family of three moving to a secluded town in Florida. Rukia enrolled in the local high school, and excelled in the culinary arts and chemistry.

In March of 2153, the Xindi launched a preemptive attack. Their prototype weapon cut a swath of land through Florida, which included her home town, vaporizing most of the buildings and populace. Hisana was vaporized along with their home. Byakuya returned from a business trip to find his home and family killed.

One month later, as Enterprise NX-01 began its search for the Xindi, Rukia reappeared in the canyon of her hometown with minor injuries. Wreckage cleanup crews discovered her the next morning, and she was rushed to the local hospital. Rukia had survived the attack relatively unharmed, despite the complete devastation the Xindi had caused to the whole area. This miraculous reappearance raised intriguing questions for Byakuya, including the possibility that Hisana could have "survived" in a similar fashion.

Recovering from the traumatic experience, Rukia relocated to eastern Russia, where she became a farmer. She discovered she had some unusual skills: seemingly-random levitation, very fast bursts of speed, and other telekinetic abilities. Rukia kept these to herself, and eventually taught herself how to control them.

As Rukia attempted to rebuild her life elsewhere on Earth, Byakuya spent the next decade finding ways to recover Hisana. Gathering scientists and professionals from all over the planet, he pushed them to find a solution, with little success. Byakuya's group determined that some kind of subspace anomaly protected Rukia from the specific type of Xindi energy beam, but little else. Eventually, six years later, Byakuya was forced to give up as his resources ran out and his team fell apart. Byakuya died a year later, and as a result, Rukia withdrew mostly to herself.

Rukia continued her life in the culinary arts, becoming a proficient chef in a small town isolated from the world. Rukia discovered that, against common sense, she did not appear to age at all; thirty years passed, and she still looked 19, just as she did when she died. As people around her grew increasingly suspicious of this paranormal occurrence, Rukia found it necessary to move around from town to town, so as not to arouse any interest in her circumstances. Rukia remained on Earth a full 204 years since her brother's death. Rukia was last seen on Earth in a small town in western Canada on the year 2364.

The Battle of Wolf 359 and the Borg threat on Earth alerted Rukia to the possibility that Earth was becoming a risky place to live. She had been present for four Earth attacks: the Xindi attack, V'Ger, the Whale Probe, and the Borg attack. Deciding to leave Earth, Rukia boarded the Enterprise-D and traveled far from her home to the distant outer worlds of the Federation. Over the course of a decade, Rukia transferred from planet to planet, checking if they were safe places to live; if not, she transferred to the next world. Complications arose as the Dominion War brewed, erupted, climaxed, and concluded; Rukia was stuck on Dominion-controlled planets for a couple years. In 2376, she eventually arrived at a small Romulan colony world called Virinat. 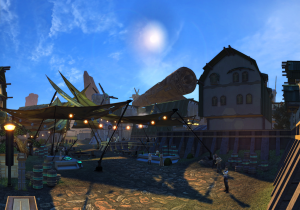 Rukia settled on Virinat with a small amount of difficulty. As she wasn't Romulan, there was hostility from some of the colonists, who wanted her to stay out of the main city. Despite this, Rukia opened a small cafe in the main city, pulling on her centuries of cooking skills in order to create interest. Rukia's Cafe gained reputation over time as the most popular cafe on the planet for having the best food and service. Over time, Rukia was accepted by the community, and she formed friends that would last for years. She also met a man named Chavek, who she would eventually marry in 2393. For the first time in a long time, Rukia felt at home. Her life was uneventful for the next sixteen years.

On the night of the Virinat colony attack, Rukia was tending her bar with Chavek and some of her friends. When the evacuation order was given, Rukia, Chavek, and their friends ran for the shuttles. Chavek was abducted by a drone while Rukia was powerless to help him, while her friends scattered and she lost track of them. Rukia took command of a shuttle and lifted off with a full load of passengers, just as an Elachi ship landed on the surface. Rukia resolved to find Chavek at any cost.

Realizing that a commission in the Romulan Republic would be her ticket to pursuing the attackers, Rukia accepted an offered role as starship commander shortly thereafter. Eventually making her way up to a D'deridex-class vessel, Rukia served with distinction in saving other colony worlds and preventing mass genocide attacks multiple times in the course of a year, culminating in a final assault against the Elachi starbase hidden in subspace in late 2409. In the process, Rukia rescued many abducted colonists, including Tenraka Kalleh from Virinat. Unfortunately, Rukia was too late to save Chavek; the remains of his body were recovered from the Elachi base during the mission. Rukia grieved for her loss and vowed to destroy the Elachi. 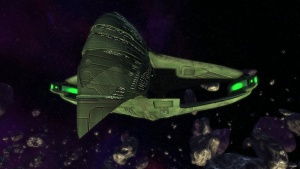 After the Elachi invasion of New Romulus was repelled, Rukia's ship, the R.R.W. V'tal K'ihai, participated in multiple war zones as a support vessel for Federation starships.

Rukia and her ship participated in the successful defense of the Qo'noS System from Species 8472 in 2410. The V'Tal suffered minimal damage in the fight. Recognizing her distinguished months of service, D'Tan personally promoted Rukia to the rank of Commander. Her ship underwent a full systems overhaul and was relaunched in June 2410. The V'Tal headed to the Delta Quadrant and participated in the invasion of Vaadwaur Prime. Shortly thereafter, Rukia was recalled to New Romulus for a classified meeting with Admiral Kererek and the senior officers of the Navy.

Days after the meeting, the Herald Sphere appeared in the Beta Quadrant, and evacuations began throughout the Federation Alliance. The V'Tal K'ihai was one of the first ships sent to assist in colony evacuations and starbase defense. The V'Tal participated in multiple engagements near Romulan Republic space, and was part of the fleet defending Starbase 39-S from an assault from a Herald armada. After repairs, the V'Tal continued to assist in mounting defenses against the Herald forces, with little success.

Late in the war, Rukia and her ship were ordered to join the task force gathering at the Krenim research facility in the Kyana system. The V'Tal participated in the assault on the Herald Sphere, during which the ship sustained critical damage to her engine core. Realizing her ship was a derelict and thus an easy target, Rukia gave the order to abandon ship. She and her crew escaped in the lifeboats, half of which were shot down by Herald interceptors as they tried to escape. Rukia lost half of her bridge crew and many deckhands in the battle.

Rukia and her remaining crew returned to New Romulus and were admitted for triage and counseling. After news of the end of the War reached New Romulus, Rukia and her surviving crew took part in victory celebrations.

Rukia attended the funerals of each of her crewmen. Rukia was deeply affected by the loss of the family she had served with for five years. Unable to continue with the loss, she resigned from the Navy a month after the conclusion of the Iconian War.

Rukia took to a remote part of the planet and, with nothing more than a prefab housing unit and a pet epohh, she lived in seclusion for more than a year. The effect of losing her husband, close friends, and loyal bridge officers within the span of two years had finally taken their toll on her. Apart from occasional visits from friends she had made during the War, Rukia avoided contact with the outside world and tried to heal the wounds of war.

During an operation to destroy the Elachi base hidden in subspace, Rukia and her boarding party discovered Tenraka along with hundreds of captured Alliance personnel imprisoned in the base. Rukia ordered the V'tal K'ihai to transport the captives aboard and give them medical care. Unfortunately, due to the Elachi invasion of New Romulus, Tenraka did not have the chance to reach a fully-equipped medical center in time to reverse her genetic damage. Rukia regretted the poor timing.

Following the ship's return to New Romulus, Tenraka was given treatment for three months before joining Rukia's crew for a six-month rotation. Rukia kept an eye on Tenraka and, along with second officer Tovan Khev, was impressed with her discipline and performance in her duties. Rukia personally picked Tenraka as her wingman, flying a Scorpion Fighter during the Kar'ukan incident.

When her six-month tour concluded, Rukia submitted Tenraka for a Merit and recommended her to the Admiralty, citing her bravery and dedication to the Republic Navy.

Rukia and Tenraka remained on good terms, and during the Iconian War they kept correspondence via subspace mail. This distant but friendly relationship continued after the conclusion of the War and Rukia's retirement from Navy service.

Rukia's hobbies include spending time with her friends, reading novels, practicing the sword arts, and occasionally cooking for the crew.