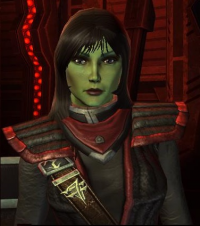 Nushid had a long and distiguished career, culminating in the Battle of the Herald Sphere, where she was killed.

Nushid was born in 2388 to a pair of destitute Orion parents. Nushid's parents abandoned her at the age of seven, leaving her to roam the Orion homeworld by herself. Surviving for four months without support, and feeding whatever wildlife presented itself, she was rescued by a passing archaeological team searching for a rare breed of Tarkanian failoos. She was then raised by one of the team members until the age of sixteen.

Nushid then found a new home and first job at the starship repair areas on the Orion homeworld. She learned much about starships and ship systems from her work as an assistant. Often she would end up chatting with ship crews, learning as much as possible about the rest of the galaxy around her.

At the young age of 20, she applied as an official Orion Syndicate worker. Nushid's inexperience made her one of the 1500 women sent by Melani D'ian in 2394 to serve the Klingon Empire during their peace negotiations. As a comfort woman, she attracted the attention of one officer: Trishish, a Gorn bekk serving aboard a Vor'cha-class starship.

Nushid used a little manipulation to convince Trishish to prove her worthiness. In 2395, during a combat skirmish with the Romulans, the ship was boarded by Reman shocktroops. Nushid reached the ship's armory and armed herself, then killed most of the Remans on her way to the bridge. She then took command of the weapons array, firing on the Romulan ship and forcing it to withdraw. For her bravery, General K'varok allowed her to enlist in the Klingon Defense Force as a full-fledged officer.

Nushid was assigned to an Orion destroyer, that same year. Nushid's ship patrolled a distant part of the Klingon-Romulan border. On shore leave, Nushid would frequently visit a small colony world, where she later met and befriended Janok, a Vulcan male, and his friend Charlott, a Human female in Starfleet. They became fast friends and remained in touch for many years.

Nushid eventually worked her way up to Captain of her own vessel through hard work and determination. Gaining command of the I.K.S. Hegh daq jaghpu', a Guramba Siege Destroyer, Nushid protected the borders of the Klingon Empire with great honor and distinction. The Hegh participated in defending the borders of the Empire from Terran Empire aggressors, and was a part of the defense of New Romulus from the Solanae fleet. For years of distinguished service, she was promoted to the rank of Lieutenant General in 2409 and served as one of the KDF's chief military strategists for Imperial defense.

The Iconian War broke out in 2410. Nushid was responsible for managing the Defense Force in evacuation of colony worlds and defense of key territories. When the war became desperate, after the death of legendary hero Kahless, Nushid took command of the Hegh and rendezvoused with the Alliance fleet at the Krenim research facility in the Kyana system, before warping to engage the Iconian fleet at the Herald Sphere. The Hegh was destroyed in the battle; most of the crew escaped in the lifeboats, but Nushid went down with her ship.

Chancellor J'mpok, along with Worf and other notable Klingon and Orion officials, performed a ritual funeral for Nushid after the conclusion of the Iconian War. J'mpok noted that her fighting spirit and dogged determination made her one of the Empire's unsung heroes of the War. J'mpok posthumously awarded Nushid the Star of Kahless, the first Orion to be inducted into the prestigious Order of Kahless.

Nushid was killed off in the Iconian War. The decision to kill her off was partially due to gender imbalance among all characters, as well as a lack of enthusiasm about the character. This decision is hardly final however.