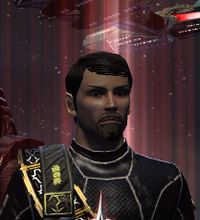 Janok (mirror) is a Vulcan Terran Empire Captain and commanding officer aboard the I.S.S. Triumph, a captured Jem'Hadar Dreadnought Carrier.

Janok is an intelligent and ruthless officer. Under his command, a fleet of Federation starships were destroyed in a daring attack on Battle Group Omega. Originating from the Mirror Universe, Janok and his crew of loyal soldiers take orders from a Mysterious Figure.

Janok was born in 2323 to a pair of Vulcan settlers, and was raised on a remote colony world near the Klingon-Cardassian Alliance and Romulan borders. The planet was mostly an agricultural world, with a minor spaceport built into a small town. Romulan traders came by frequently, and due to Janok's curiosity with the futuristic craft, he came in contact with the much less civilized Romulans. In doing so, he developed a bond with the traders and their colleagues. As such, Janok never learned to repress his emotions as well as others, and was frowned upon by the Vulcan populace. He found himself accepted only by the Romulans.

Janok lived much of his young adult life in the unpopulated but fertile hills to the east of the town, studying manuals from the original settling craft and honing his technical skills in solitary work. Janok created a subspace cannon on the top of a large hill in 2380, however he was ignorant to the dangers of using subspace technology near an unprepared village. Janok's cannon blasted a massive crater into the ground below, and the subspace energy destroyed the village, killing thousands. Janok survived alone in a fortified bunker.

The Terran vessel I.S.S. Victory arrived in the system two days later after detecting the subspace aftershocks. Janok was taken aboard and conscripted as one of Victory's engineering deckhands. Working diligently in his role, Janok earned a commission in early 2381.

As an Imperial officer[edit | edit source] 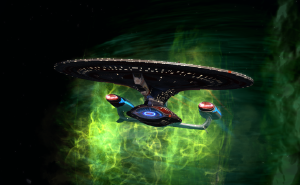 Janok continued to serve as warp plasma technician aboard Victory for six years. In 2387, Janok was promoted to Lieutenant and placed in charge of Victory's transporter system. Growing increasingly disgruntled with the menial position, Janok began to form a mutiny within the ship. In 2388, Janok used the transporter system to beam Captain Rolke and his command staff into agony booths, captured the bridge, and secured the ship.

Unknown to him, a rival group of mutineers led by Lieutenant Commander Charlott Kadjer disagreed with a mere lieutenant taking command of a Galaxy-X Dreadnought Cruiser, and seized command of the ship a day later. With all of his mutineers switching sides to Kadjer's, Janok narrowly escaped death and departed the ship using a runabout.

As a rogue Captain[edit | edit source]

Janok went rogue following his escape. Gaining a crew of disgruntled former Klingon-Cardassian Alliance soldiers, in 2390 he captured a Tellarite patrol ship in the Jouret system. Janok and his band of rogues continued to pirate cargo ships until finally in 2392 an Alliance vessel, the Vor'cha-class cruiser A.K.S. Eklipse was dispatched to destroy him.

Using surprise and a false surrender, Janok and his rogue crew boarded the ship and killed most of the crew. Janok's crew discovered a strange compartment with an odd device hidden within. Janok himself activated the device and communicated with the Mysterious Figure for the first time.

The Mysterious Figure explained herself as originating from another time and place. She offered Janok the same deal that was offered to the crew of the Eklipse: great power and a deadly superweapon if they were to swear allegiance to her.

Eklipse ran silent on stardate 89783.21. Over the next few years, Janok and his crew gathered scientists, weapon specialists, and strategists from around the galaxy. In 2399 the Eklipse's crew developed an advanced disruptor beam array, which was duplicated and equipped on the ship.

After years of preparation and R&D, in 2402 the Mysterious Figure provided Janok with the coordinates of a multidimensional starship transporting device. Eklipse travelled to the Kalandra system and used the device to travel to the prime universe.

Janok was the chief engineer on the U.S.S. Solstice, a Nova-class starship, for four years. The Solstice participated in multiple conflicts in the Beta Ursae sector block. Janok gained command training and experience in this position, and was later promoted to Commander in 2398 and became the XO of the Solstice.

Janok's first taste of command was in 2401 when the Solstice was assigned to patrol the Gamma Orionis sector block. The Solstice was attacked by a Borg probe, which crippled the ship and killed the captain and dozens of officers. Janok quickly ordered all hands to abandon ship and evacuate - but not before setting the ship's autopilot to ram the Borg ship, destroying it. Seventy-two officers and crew survived as a result of Janok's quick thinking. His actions earned him a prestigious medal and his subsequent promotion to the full rank of Captain.

Janok has been described as "fanatically bent on killing and oppression, yet retains his Vulcan detachment in a sadistic way".