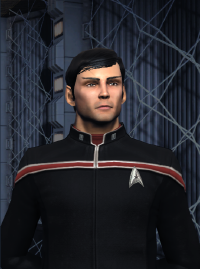 Janok is a Vulcan Starfleet Commodore. He was the commanding officer of the starships U.S.S. Providence and U.S.S. Cassini, as well as senior officer in the 182nd Task Group.

Janok is an intelligent and diplomatic officer. Under his direction, the Federation initiated relations with three new races and expanded known space. He served on the front lines during the Klingon War, Undine and Vaadwaur conflicts, and the Iconian War.

Janok was born in 2323 to a pair of Vulcan settlers, and was raised on a remote colony world on the outskirts of Federation space, near the Klingon and Romulan borders. The planet was mostly an agricultural world, with a minor spaceport built into a small town. Romulan traders came by frequently, and due to Janok's curiosity with the futuristic craft, he came in contact with the much less civilized Romulans. In doing so, he developed a bond with the traders and their colleagues. As such, Janok never learned to repress his emotions as well as others, and was frowned upon by the Vulcan majority. He found himself accepted only by the Romulans, and by Nushid, an Orion female who worked on an Orion destroyer craft patrolling in the area.

Janok lived much of his young adult life in the unpopulated but fertile hills to the east of the town, studying manuals from the original settling craft and honing his technical skills in solitary work. Janok created a rudimentary, innovative craft that launched into orbit in 2380, however he was ignorant to the true vacuum in space. Janok's craft exploded, but he was saved by an orbiting Federation starship, whose transporter officer was a third-year Starfleet cadet by the name of Charlott Kadjer. Over the next three months, Janok, Charlott, and Nushid quickly became close friends. When the Federation starship left the sector, Janok decided to leave his home and take on a new life, that of a Starfleet officer. Janok officially enrolled in Starfleet Academy in the fall of 2381.

As a Starfleet officer[edit | edit source] 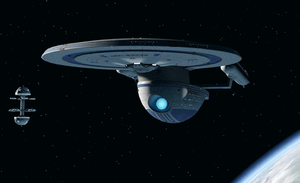 Passing the academy with above average marks in 2385, Janok was assigned to the U.S.S. Laertes, an Excelsior-class starship. Within a year, Janok gained the rank of Lieutenant and transferred to a remote Federation research outpost as Deputy Chief Engineer.

While at the outpost, Janok created an improved Emergency Command Hologram. Janok received a nomination for the Nobel Prize for Holographic Technology. After eight years, Janok was promoted to Lieutenant Commander and transferred to the U.S.S. Solstice in 2394, along with the E.C.H.

Janok was the chief engineer on the U.S.S. Solstice, a Nova-class starship, for four years. The Solstice participated in multiple conflicts in the Beta Ursae sector block. Janok gained command training and experience in this position, and was later promoted to Commander in 2398 and became the XO of the Solstice.

Janok's first taste of command was in 2401 when the Solstice was assigned to patrol the Gamma Orionis sector block. The Solstice was attacked by a Borg probe, which crippled the ship and killed the captain and dozens of officers. Janok quickly ordered all hands to abandon ship and evacuate - but not before setting the ship's autopilot to ram the Borg ship, destroying it. Seventy-two officers and crew survived as a result of Janok's quick thinking. His actions earned him a prestigious medal and his subsequent promotion to the full rank of Captain.

As a Starfleet Captain[edit | edit source] 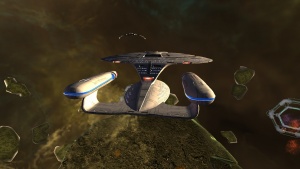 With the Solstice destroyed, Janok was assigned command of the U.S.S. Cassini, a Dominion War-era Galaxy-class exploration cruiser, in 2401 with orders to reinforce the Federation border against the Klingons in the Eta Eridani Sector Block. The Cassini aided Starfleet Elite Task Forces in multiple engagements in that year.

Janok temporarily took command of the shared reserve ship U.S.S. Repulse in 2408 when Cassini underwent a systems overhaul. Following the overhaul, Cassini returned to the front lines for another fourteen months of conflict with the Klingons. Cassini participated in the defense of Vulcan against a Romulan fleet invasion in early 2409. Captain Janok also participated in the battle to retake Deep Space Nine, and in the discovery of a Preserver Obelisk. Aside from combat missions, Cassini discovered twelve inhabited star systems, established first contact with three races, and traveled to fluidic space.

Over the next several months, Cassini set out to find and destroy Undine scout vessels, as well as assist in the Solanae Dyson Sphere. Cassini was one of the first ships to voyage into the Delta Quadrant, and made contact with a few alien races. Janok personally made diplomatic contact with two new species while in the Delta Quadrant. Janok was a member of a small ground team responsible for eliminating Gaul at the conclusion of the Vaadwaur conflict.

During the Vaadwaur conflict, Janok's chief medical officer, Commander Nell Mutchler, documented Janok displaying symptoms of unstable mental health. After the conflict ended, Janok continued to serve as both task group commander and commanding officer of Cassini, however his day-to-day role as task group commander had been reduced to allow him to recuperate. Nevertheless, Janok was required to leave the ship on medical leave and take an three-month excursion back to Earth in summer 2410. His excursion was cut short by the sudden appearance of the Herald Sphere in Romulan space.

On the eve of war with the Iconians, Janok was recalled to Earth Spacedock to attend a classified meeting with Starfleet Command. Once war broke out, Janok was placed in charge of reassigning the Federation fleet to fight the Herald forces. Janok himself met with representatives of the Tholians, Voth, and True Way, and through skillful diplomacy he convinced them to join the war effort against the Iconians.

Janok and his ship did not participate in many engagements, often acting as fleet command ship during most operations. Cassini did not participate in the assault on the Herald Sphere, and was spared the fate of most Alliance ships that were destroyed at the battle. Following the defeat, Janok and his ship were recalled to Earth to help defend it against the inevitable Herald attack.

Janok and the Cassini fought in the defense of Earth against the Herald forces, in the final battle of the War. Cassini was destroyed while defending Earth Spacedock from an Iaidon battleship. 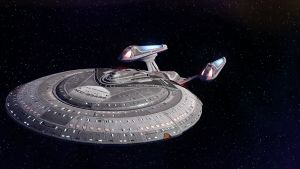 Janok attended funerals for his fallen friends, which took place a month after the conclusion of the Iconian War. Admiral Quinn, Rear Admiral Charlott Kadjer, Commander Rukia Kuchiki, Captain Ejyo'Suvwi, Captain Nydia Veselovsky, Captain Gahyl Ihlob, and many of Janok's friends and fellow officers attended the funeral of General Nushid, which took place aboard the Addrivat.

A year following the end of the Iconian War, Admiral Quinn authorized Janok to take command of a Sovereign-class vessel as his new ship. Captain Janok set out from Vancouver Shipyards as commanding officer of the U.S.S. Providence.

Janok and Charlott met on Janok's homeworld, when he attempted to fly a homemade spacecraft into orbit. Charlott beamed Janok aboard her ship and saved his life. Charlott encouraged Janok to join Starfleet, seeing his engineering aptitude and resourcefulness.

Janok was present at Charlott's promotion to Rear Admiral in 2406, and was assigned under Charlott's overall command and participated in operations across the Eta Eridani sector block.

Janok and Charlott worked together throughout the Iconian War, with Janok serving under Charlott's command. Janok and Charlott both participated in the defense of Earth against the Herald forces at the conclusion of the War, where Janok is believed to have perished.

Charlott attended Janok's funeral and gave a eulogy, recounting their history and decades of adventures together.

Janok and Nushid were longtime friends since the days he lived on his home planet. Along with Charlott, Janok maintained their friendship after Janok enrolled in Starfleet Academy and rose through the ranks. Janok and Nushid would meet often at Drozana Station, sharing drinks and enjoying their time together away from the Federation-Klingon conflict.

With the outbreak of the Iconian War, Janok lost touch with Nushid, as she was occupied with KDF fleet operations. Janok received word of Nushid's death at the battle of the Herald Sphere through KDF channels. Janok expressed interest in attending Nushid's funeral at the conclusion of the War, but never got the opportunity to do so.

Janok created E.C.H. while serving at a Federation research outpost in 2393. E.C.H. and Janok remained friends after parting ways, following the destruction of the Solstice. During the Iconian War, E.C.H. was often critical of Janok's fleet tactics, which prompted Janok to rethink his strategy and save more lives. E.C.H. did not attend Janok's funeral, as his ship was assigned to post-War relief efforts across the Federation. Nevertheless, E.C.H. honoured Janok's memory by naming a ship after him. 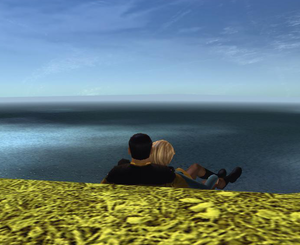 Captains Janok and Nydia on Risa.

Janok and Nydia Veselovsky began a romantic relationship in 2408. Janok was married to Nydia in 2409, two months before the Solanae Dyson Sphere was found. The private wedding ceremony was located on Risa's west hill.

Janok is best known for his intelligence, strategic skill, compassion, and balance between logic and emotion.

Janok was also well known for his contributions to Starfleet side missions, dubbed 'Foundry' missions by the general Starfleet populace. Janok, an amateur historian, has contributed a Foundry mission entitled 'HB: Best of Both Worlds', which was never completed.