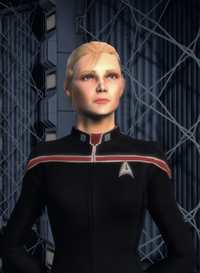 Charlott Alysha Kadjer is a Human Rear Admiral of the Federation Starfleet. She is the commanding officer of the U.S.S. Ulysses, a Nebula-class starship. Charlott was a flag officer during the Klingon conflict in the Eta Eridani Sector Block, and the Iconian War. She was formerly a Director of Section 31 Operations.

Charlott was born in 2421 to a pair of intelligent researchers, Mike and Nancy Kadjer, on the Rivos homeworld in the Rivos System. Charlott was described as precocious and insightful at a young age, often solving conflicts with classmates by diplomacy. After thirteen years of school, Charlott applied for and was accepted to Starfleet Academy in 2439 after she graduated high school.

At Starfleet Academy, Charlott was consistently at the top of her class, doing well academically and participating in a varsity team. Charlott spent two years at Starfleet Academy before being assigned to the patrol ship U.S.S. Krypton for the remainder of her two years of Starfleet training. Charlott performed her duties well, and received merit for her hard work and creative thinking.

In 2442, while on a survey mission in the Delta Quadrant, Krypton discovered a fleet of Hierarchy warships hidden in a nearby stellar nebula. Before the ship could escape, Krypton's warp core was destabilized and her bridge crew was killed. Charlott led the evacuation of the ship's personnel into escape pods and stayed behind to stabilize the failing warp core. A flux torpedo hit Krypton creating a temporal anomaly which enveloped the ship and threw it back in time to the year 2379. Ultimately, Charlott managed to save the lives of fifty cadets and over two hundred crewmen.

Krypton, upon contacting Starfleet, was repaired and relaunched with a new captain and crew. Charlott continued her Starfleet training following an extensive review by the Department of Temporal Investigations, which had deemed no changes to the timeline were necessary.

In 2380, Charlott was training in Krypton's transporter room when she picked up a small spacecraft attempting to leave orbit of a small colony. She immediately realized that the ship was not meant for space travel, and beamed the occupant to the Krypton before the ship exploded. Charlott and her rescuee, Janok, quickly became close friends. They often spent time at the local bar, along with Orion officer Nushid, who would later become her friend. When the Krypton departed the system, Janok boarded the ship as a first year cadet on Charlott's recommendation. Charlott graduated from Starfleet Academy in 2381 and was posted to the exploration ship U.S.S. Federation as an ensign. Janok, Charlott, and Nushid remained strong friends, keeping in touch for many years.

As a Starfleet officer[edit | edit source]

Charlott was promoted to the rank of Lieutenant Junior Grade in 2383 and served as assistant science officer on U.S.S. Montreal, a patrol vessel. It is believed she was recruited by a Section 31 agent during her service on the Montreal. Due to her hard work and connections, Charlott was promoted to Captain in 2402 and to Rear Admiral in 2406, and transferred to Deep Space station K-7 as a Director of Section 31 Operations for the Eta Eridani sector block.

Charlott's leadership skills surfaced again during the Vega colony event of 2408, where her temporary ship, along with the U.S.S. Challenger and other Federation ships, engaged a Borg cube detected in orbit of Vega XIII. The ship managed to destroy the Cube, but was boarded by an enemy away team. A massive firefight occurred across thirteen decks, reaching the bridge, where the captain and security officer were vaporized. Charlott riskily vented the atmosphere of the bridge and two other decks, almost blowing herself out into space; the dangerous tactic managed to save the ship. Charlott was awarded the Medal of Valor, and was granted command of U.S.S. Pulsar, a Vesta-class science cruiser. Charlott frequently commanded this vessel for Section 31 operations as well as sector defense from the Borg for a period of one year. 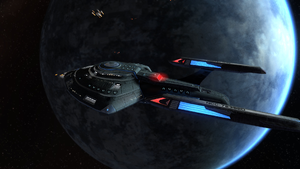 Charlott occasionally took part in fleet skirmishes in the Delta Quadrant. In most cases Charlott was the flag officer of several task groups attacking Vaadwaur facilities. She also participated in the planning of the final assault on the Vaadwaur homeworld. After the conclusion of the Vaadwaur conflict, Charlott was recalled to Earth for a debriefing with Starfleet Command.

Upon the appearance of the Herald Sphere, all Starfleet vessels were mobilized and readied for war. Charlott temporarily relinquished her Section 31 Director position and became a junior flag officer in war preparations.

When the Iconian War officially began, Charlott was placed in charge of multiple task groups responsible for counterattacking Herald fleets. After Starfleet suffered large losses, Charlott's task groups were placed in charge of protecting a general retreat from the front lines. Everett took heavy damage during the retreat from Starbase 39-Sierra; Charlott was injured and was carried out by her senior staff. The crew of Everett abandoned ship following catastrophic engine coolant leaks; the ship was destroyed shortly after.

Charlott was not present at the assault on the Herald Sphere, due to the loss of her command ship and injuries to her leg. Nevertheless, Charlott participated in high level preparations for the battle to defend Earth. Her task groups, including Commodore Janok's flagship U.S.S. Providence and her former ship U.S.S. Pulsar, were assigned to the defense fleet.

During this time, Section 31 had executed a plan to forcibly conscript able-bodied Earth civilians as suicide bombers, as part of a two-prong strategy to disable Iconian capital vessels internally. Charlott was summoned before Section 31's Directorate Council, where she was instructed to reveal to Starfleet Command this secret plan. Charlott did so begrudgingly and resigned from Section 31 shortly after. She is quoted with saying, "despite our civilization facing destruction, I cannot condone the actions of a minority to place our sisters and brothers before us in the line of fire" (Tales of the Iconian War: Rear Admiral Kadjer).

Charlott was stationed onboard Earth Spacedock during the final battle of the War. Pulsar, Providence, and the rest of her task force fought in the battle to defend Earth against the Herald fleet. Most of the ships under her command were destroyed, including Providence and her former ship Pulsar. 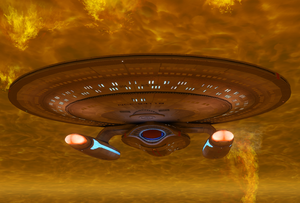 The Temporal Cold War surfaced two days later. Charlott and her crew were given the Wells-class timeship U.S.S. Alcubierre from the 29th century Federation Starfleet to aid in the fight against the Na'kuhl. The Alcubierre, along with other Federation forces, secured a Krenim installation in the Delta Quadrant and seized control of a Krenim temporal weapon. Charlott took command of the weapon and used it to correct temporal incursions following the conclusion of the conflict.

Charlott surrendered the weapon and was permitted to keep the Alcubierre in the 25th century, provided it only be used in emergency situations to correct the timeline. Charlott and the crew of the Ulysses agreed to the stipulation and the Alcubierre remained docked to Deep Space K-7 with restricted access. Charlott resumed her command of the Ulysses.

Charlott and Janok met in 2380, when Charlott beamed Janok up to the Krypton before his homemade ship exploded. Charlott and Janok quickly became close friends. They often spent time at the local bar, along with Orion officer Nushid, who would later become her friend. When the Krypton departed the system, Janok boarded the ship as a first year cadet on Charlott's recommendation. Janok, Charlott, and Nushid remained strong friends, keeping in touch for many years.

Charlott and Janok kept in regular contact during their rise through the ranks. Janok was present when Charlott was promoted to Rear Admiral in 2407. Charlott requested Janok and his ship to join her task groups fighting in the Federation-Klingon War. Janok remained under Charlott's general command until the conclusion of the war in 2410.

During the Iconian War, Charlott assigned Commodore Janok's 181st Task Group under her command. Charlott and Janok fought against the Herald forces at numerous engagements at the front lines, and were assigned to Earth's defense fleet at the conclusion of the war.

Janok died in the final battle in defense of Earth. Charlott attended Janok's funeral and awarded him the Starfleet Medal of Valor. Charlott delivered a eulogy, recounting their many adventures over the past decades.

Charlott and Nushid met on Janok's home planet. At the time, Nushid was posted on an Orion destroyer as a junior officer. They quickly became close friends, discovering they both shared overlapping interests in music and cuisine. They remained in touch throughout the next few decades, as Nushid moved up the ranks of the Klingon Defense Force and Charlott was promoted to Rear Admiral.

During the Federation-Klingon conflict at the start of the 25th century, Charlott remained in contact with Nushid throughout the war, and met her occasionally on the neutral Drozana Station. Both Charlott and Nushid felt that the conflict between their two governments was pointless, and that the appearance of the Undine in the Beta Quadrant was a larger concern that needed their full attention. This view was proven right with the Undine attack on Earth Spacedock and Qo'noS.

When the Iconian War broke out, Charlott and Nushid kept in frequent contact and worked together in the planning of evacuation of outlying colonies.

Charlott received news of Nushid's death at the Battle of the Herald Sphere, while at her home on Earth. She grieved for the loss of her close friend, and sent her condolences to Nushid's relatives on Orion. Charlott attended Nushid's state funeral after the end of the Iconian War, and placed a holopicture of them on the casket.

Most Section 31 reports cannot be verified. It is believed that Charlott was recruited in 2384 and participated in clandestine actions to prevent the Klingon Empire from destabilizing. Section 31 operatives in Starfleet Command were the likely reason for Charlott's quick advancement through the chain of command, culminating in the rank of Rear Admiral in 2406.

Charlott became a Director of Section 31 Operations and assigned to the Eta Eridani Sector Block that same year. In her position, Charlott deployed operatives, including Franklin Drake, to disrupt KDF advances in the area. Officially, her position as Rear Admiral made her a flag officer. She directed Starfleet ships into battle and occasionally was an active participant.

During the Iconian War, Section 31 had created and executed a plan to forcibly conscript able-bodied Earth civilians as suicide bombers, as part of a two-prong strategy to disable Iconian capital vessels internally. Charlott was summoned before Section 31's Directorate Council, where she was instructed to reveal to Starfleet Command this secret plan. Charlott did so begrudgingly and resigned from Section 31 shortly after.

Charlott was briefly in a romantic relationship with a junior officer, a Bajoran male. Her love interest perished in an attack by the Breen.

Charlott has a sweet tooth, and prefers chocolate sweets. She also enjoys listening to Klingon music, and has an amateur collection at her home in Venezuela, Earth.