The U.S.S. Addrivat is a Guardian-class starship in service with the Federation Starfleet. She is under the command of Captain Tallamirra Assilaph.

Constructed in 2408, Addrivat was the second Guardian-class starship to be constructed. The ship class had a critical design flaw with its configurable warp geometry, which prevented mass production until 2410. Following corrections to the ship class, Addrivat was able to maintain a high impulse velocity for short periods of time, with the help of its auxiliary warp engines.

Addrivat was launched with a crew complement of 722, which was later expanded to 897 during the Iconian War. As the second ship of the Guardian-class cruiser, Addrivat was armed with six collimating phaser strips and two rapid-fire torpedo launchers. She was originally designed to serve as a command ship, and was outfitted with additional communications and computer processing equipment to fulfill this objective.

Addrivat was commissioned in 2410 under the command of newly promoted Captain Assilaph; her first command. Addrivat's first tour of duty was spent engaging in combat with Herald forces during the Iconian War, where she distinguished herself in aggressive combat. The ship proved reliable and durable during combat, with few critical repairs needed. While she was rarely used in her original role as a command ship, Addrivat was used more often for planetary evacuations and escort duties. The ship participated in the battle of Earth at the conclusion of the War.

Following the Iconian War, Addrivat was drydocked and fully repaired over the course of two months. Following the repairs, she was ordered to the Alpha Quadrant on a two-year mission of exploration.

The U.S.S. Everett was a Nova-class starship in service with the Federation Starfleet. She was briefly under the command of Rear Admiral Charlott Kadjer.

Everett was constructed at Utopia Planetia Fleet Yards and commissioned in 2374, during the Dominion War. Everett, like other Nova-class starships, was designed for short-term planetary research. Her first tour of duty was to provide reconnaissance for the Seventh Fleet. Everett suffered moderate damage during the Battle of Cardassia. Following the end of the Dominion War, Everett joined thousands of other Alliance vessels providing repatriation and medical assistance to billions of civilians.

Everett was placed into reserve in 2379, and was stored at the fleet depot in orbit of Neptune. The ship was not reactivated until 2409, when she was refitted with the latest technologies and equipment. Her original warp drive system was completely replaced, as were the tactical and defensive systems. The refit was completed by 2410 and the ship was recommissioned.

Everett participated in the first wave of exploration in the Delta Quadrant. The ship encountered five new civilizations and was present during the Vaadwaur conflict.

Everett was recalled to the Alpha Quadrant just prior to the start of the Iconian War. Starfleet's early losses forced a general retreat. Everett, along with other Starfleet vessels under Kadjer's command, aided civilian evacuations from front-line worlds.

The U.S.S. Providence was a Sovereign-class starship in service with the Federation Starfleet. She was under the command of Commodore Janok.

Providence was commissioned in 2402 under the Emergency Fleet Activation directive following the outbreak of hostilities with the Klingon Empire. Providence was a state-of-the-art vessel incorporating decades of improvements on the Sovereign-class design. She featured the latest Mark XII collimated phaser arrays capable of rapid-fire output, and a rare wide-angle fore torpedo launcher.

Providence participated in the Federation-Klingon conflicts in the Eta Eridani Sector Block. Captain Janok took command of the vessel in April of 2410. Over the next several months, her mission was to find and destroy Undine scout vessels, as well as assist in efforts at the Solanae Dyson Sphere. Providence was one of the first ships to voyage into the Delta Quadrant, and made contact with a few alien races. Providence participated in the battle over the Vaadwaur homeworld and provided orbital fire support against Gaul's installation.

The ship participated in the Iconian War as Commodore Janok's flagship in the 182nd Task Group. Providence was destroyed with all hands during the Battle of Earth at the conclusion of the Iconian War.

The U.S.S. Pulsar was a Vesta-class starship in service with the Federation Starfleet. She was under the command of Rear Admiral Charlott Kadjer.

Pulsar was commissioned in 2408 under Kadjer's command. The ship participated in the Klingon conflicts in the Eta Eridani Sector Block alongside Captain Janok's starship Challenger II. Pulsar was routinely involved with scouting Klingon territory, taking advantage of the ship's slipstream drive to evade capture.

Pulsar later participated in the Iconian War and was destroyed in the battle of Earth.

The U.S.S. Yukikaze was a Defiant-class starship in service with the Federation Starfleet. She was under the command of Commander, and later Captain, Eyjo'SuvwI.

Yukikaze was commissioned in 2385 and served in the Alpha Quadrant, offering support to Federation colonies. She was eventually commanded by Ejyo'SuvwI in 2399. The ship was drydocked and received a retrofit in 2408, greatly enhancing her combat capabilities.

Yukikaze participated in the Undine conflicts and the Iconian War. During the War, during a response to a distress call, the ship was transported to an alternate timeline in 2428. The ship and her crew were instrumental in the unification of ex-Federation factions and prevented a civil war. Yukikaze eventually returned to her original time with no noticeable effects.

Following the Iconian War, Yukikaze was part of a quadrant-wide effort to resettle billions of evacuated civilians to their original homes. 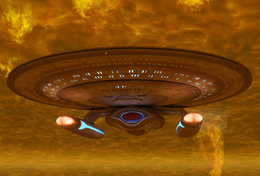 The R.R.W. Torelan was a Tal Shiar D'ridthau Warbird Battle Cruiser that was used as a platform for experimental science. Torelan was stolen by junior researcher T'areha Valdran and became the Romulan Republic Navy's research vessel.

This page was created November 25 2016 to reduce the page size of the Extras page.