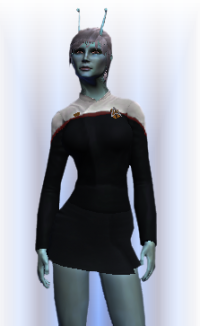 I'm a Graphic Design student in Michigan. Who has been a life-time Trekkie (thanks mom!), During the school breaks I try and get onto STO at least twice a week (usually more), school makes that harder & I usually only find myself online on Sundays.

I am available (especially during the summer) to donate some time working on images & such if needed. My primary computer is out of commission so I cannot create many images for the time being. Feel free to ask & I'll see if it's something I can do!

Meej spent most of her childhood on Starbase 39, where her parents were stationed. When she became of age she easily got into Starfleet Academy to pursue a science field, specializing in planetary research.

Currently in command of the USS Wright, a Refit Intrepid Class Retrofit starship, she has been offered command of one of the first Retrofit Nova Classes once the production on them begins.

I can also be found on Tribble, however since they haven't released anything new on Tribble, I haven't logged in in a while.