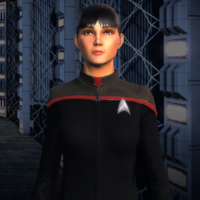 Karen Ooiue is a Human Female Temporal Agent from the future. Her present day counter-part was born in 2414 alongside her twin, Aimee Ooiue, and both are the daughter of Alex Ooiue and Jessica Ooiue. Karen appears to be approximately 20 to 25 years of age suggesting that she is from some 20 years in the future. In her own time frame, Karen seems to have joined up with the Temporal Agency. She has not disclosed whether she was recruited by Agents or enlisted in the Agency in her time, however her mission is like every other Temporal Agent; to protect the timeline. Despite her position, she is still a novice at her job and continues to grow as a person.

Karen first appeared on the U.S.S. Carthage, her father’s ship and mother’s former ship, in mid 2410 as Crewman Samantha Jennings; a nervous yet promising new crewman who only graduated in the Class of 2409, the year previously. Her temporary identity was fabricated in order to blend in with the crew of the Carthage and protect the ship, and everyone inside, from changes in the timeline.

Her fabricated background and her emotional reactions to seeing younger versions of the family she grew up with made many suspicious of her. Chief Engineer John Donoue and Lt. Cmdr Tribalt fabricated their own scenario in which to learn what her motives were, only for them to find out her true identity as the daughter of Admiral Ooiue from the future. With the Temporal Cold War raging, Karen’s mission became apparent as to protect key figures, ships and events in the timeline, with the Carthage being one of them due to the involvement of Temporal Mechanics with Ja’Dok and the Jantos IV incident.

Karen’s identity was exposed when she herself told the crew that she volunteered to be sent here to protect them after she initiated a temporal shield around the Carthage to protect it from major changes in the timeline. Apparently, Karen volunteered because she believed she was the only one capable of getting the crew to acknowledge the threat of the Temporal Cold War, since Admiral Ooiue disliked time travel particularly after the Jantos IV Incident. Karen revealed her identity as Admiral Ooiue’s daughter to the Senior Officer’s of the Carthage only and remained on board to keep things in order and to make sure the Carthage wasn’t affect by any changes in the timeline.

She has never revealed the specifics of her life to anyone in this time period and refused to not only protect the timeline, but make sure her life wasn’t dictated by prior knowledge of a temporal event. She served as a Temporal advisor but remained outside of the decision making process to prevent contamination of the timeline. Her temporary position was Security Officer under the guidance of Commander Grachob, Chief of Security.

Over the span of two weeks, Karen was generally accepted as a friend by the crew and the Senior Officers acknowledged her heritage as Admiral Ooiue’s daughter. She was tested several times during this period to help her grow as a person and to assist in developing her skills as well as assess her emotional status on being on a vessel her family served on before she was born.

Eventually, she was persuaded by her father, Admiral Ooiue, to return to her time frame and came to realize that her mission was complete. She agreed with Grachob to resume her training when she returned to her time frame. Additionally, Tribalt indirectly found out that she may not have been an only child, but Karen swore him to secrecy over the matter asking him to never speak of the conversion.

After a heartbreaking farewell, Karen said goodbye to the crew of the Carthage and was transported back to the 31st Century. It is presumed she went back to her original time frame but her current status is unknown.