From Star Trek Online Wiki
Jump to: navigation, search
WORK IN PROGRESS
The following is a WORK IN PROGRESS and should not yet be linked to any other articles, nor categorized anywhere. 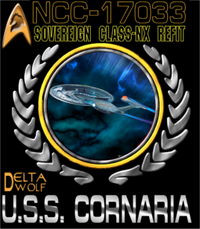 The USS Conrnaria is an Sovereign-class, NX Refit with the purpose of providing exploration and battleship duties for Delta Wolf Fleet. It's NX Refit Is HIGHLY CLASSIFIED at this time

The USS Cornaria (NCC-97033) was commissioned in 2399. Built at the Utopia Planitia Fleet Yards, it was initially designed for exploration/support -class starship.

The Cornaria served as a Flagship, for the ASTDF (Advanced Star Fleet Tactical Defense Force) under the command of Captain Mike Ramirez.The ASTDF's Primary fleet role, was to defend the Alpha Quadrant and patrol its borders. After the Impending Borg attacks it was determined that when the Borg would strike again, and if they did Starfleet would be ready

In 2401, the Cornaria was assigned to a patrol near Starbase 54in the outer borders of Federation/Elorg Bloc Space, on the patrol Captain Ramirez & the Cornaria where ambushed by a Borg Cube and a Sphere Cornaria outmatched the Sphere and destroyed it and damaged the cube. The Cornaria would have been destroyed by the Cube if it was not for the USS Ti-Condaroga from Starbase 54.

The Aftermath of the Borg Encounter[edit | edit source]

In 2402 after the Borg attack and the gallant efforts of the Cornaria and her crew, captain Ramirez died as a result of his injuries and his First Officer Kel De' Mar was commissioned as captain by Admiral Nick Wollert. The Cornaria and the ASTDF Help defend the Alpha Quadrant up until 2409 when star Fleet Disbanded the ASTDF.

In 2409.189, at the request of Captain Kel De' Mar the Cornaria was transferred to the Delta Wolf Fleet under the command Commander, Captain Accalia Belmonte.The Cornaria was scheduled for a Tactical NX Refit, and is current on standby.