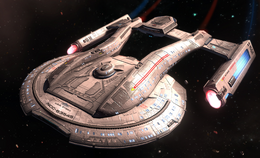 Torpedo: High Yield is a very effective ability for space combat in both PvP and PvE. It allows players to deal massive damage to an enemy's hull if their facing shield is down. Shields hugely reduce the damage done by the torpedoes, but the torpedoes themselves do lower shield strength and this ability can still be used effectively against a shield facing that is low. The first torpedo will blast the shield away while the other(s) will hit the hull directly (except for Plasma).

Auxiliary to Battery drains your ship's Auxiliary power levels and equally distributes it to your Weapons, Shields, and Engines power levels. If you're not interested in saving your Aux power for abilities or turn rate, this provides a reasonable, albeit brief, boost to your ship's capabilities.

Tachyon Beam drains an enemy starship's shields. It is useful in both PvE and PvP. Increases in effectiveness based on current auxiliary power level.