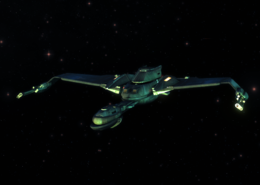 The I.K.S. Wrath, commanded by Lt. Commander Ipuvaepe, and participates in many battles for the glory of the Empire. It currently patrols the Pi Canis sector block, assaulting Federation positions and ambushing transports.

Tachyon Beam drains an enemy starship's shields. It is useful in both PvE and PvP.

Lieutenant Kobor is the second in command of the IKS Wrath, and has an "itchy" trigger finger. He prefers dual plasma pistols when boarding another ship. As a Bridge Officer, he specializes in rerouting emergency power to weapons.

Lieutenant Yuki Baltar "L'sbyn" is the Head Engineer on board the IKS Wrath, and is responsible for the use of the ship's . She is also the lead member of Away Team 2, the primary boarding away team.

Lieutenant B'Etara is the Chief Science Officer of the IKS Wrath. She is responsible for use of the ship's Tachyon Beam array, as well as the feedback pulse.

Lieutenant ████████ is a Science Officer on board the IKS Wrath. She is responsible for rerouting emergency power to the shields.