Welcome! My name is Bluegrass Geek, a gamer from Kentucky. I make my living as a ward clerk in the local emergency room. In my spare time, I play STO and WoW online, as well as Xbox Live games and various Steam games. For other fun, I play Dungeons & Dragons and various board games with local friends, and enjoy writing short fiction. 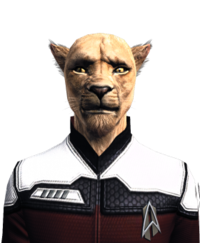 C'ruut is a Caitian Starfleet tactical officer. His mother was a medical officer in Starfleet, which meant constant transfers to new starbases and ships as he grew. C'ruut never knew his father, and lacked stability in his life due to his mother's career, which led to several brawls with other children when he didn't quite fit in. They spent the longest tour on the U.S.S. Carolina, where he developed a knack for starship combat by competing with the tactical officer in holodeck simulations. This provided the direction and outlet he needed, and C'ruut entered Starfleet early, graduating with an assignment to the experimental refit light cruiser, U.S.S Heroic.

C'ruut assumed command of the Heroic after its ranking officers were killed during the Borg attack on the Vega system. The Heroic was decommissioned shortly afterward as a failed experiment. However, C'ruut's record led to his promotion and he received command of the U.S.S. Tecumseh.

During his command of the Tecumseh, C'ruut was recognized for his actions in stopping a Klingon plot to escalate the war, assisting the Reman resistance and repelling a Breen assault on the Deferi. For these accomplishments, the Caitian received a promotion to Commander and was assigned to a new, experimental Heavy Escort U.S.S. Odysseus.

The Odysseus spent a tour patrolling Romulan sector space, as well as exploring the nearby Eridan Belt. Though she performed admirably, the Odysseus was eventually crippled beyond repair while rescuing the U.S.S. Griffin from a Hirogen trap. C'ruut was given command of a new ship, the U.S.S. Heracles, and promoted to Captain with orders to report to Deep Space 9.

During this tour, the Heracles was instrumental in defeating several True Way plots, an Undine takeover of DS9, as well as incidents involving the "mirror universe". The ship and crew distinguished themselves during the Jem'hadar seige, and C'ruut was promoted to Admiral.

C'ruut spent some time attached to Battle Group Omega on various ships, exploring the Gamma Orionis Sector Block and investigating the resurgence of Borg activity, before settling on a newly-commissioned Armitage class carrier as his flagship. Christened the U.S.S. Odysseus-A, and equipped with experimental Borg technology & weaponry, the Odysseus is currently providing humanitarian & defensive aid on New Romulus and in the Tau Dewa Sector Block.