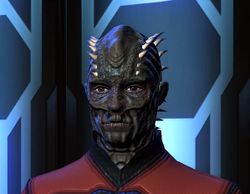 The term Alien is used in Star Trek Online to globally define the customizable species' for Starfleet, DSC Starfleet, the KDF and the Romulan Republic. These species are playable but due to how involved the character creator is it is unlikely two people will create identical aliens unless they share their settings. Some players may be familiar with calling them Klingon Aliengens or Unknowns due to these being their previously used names during the game's beta stages.

The customizable species in the game features a very rich set of options for the player. This Alien species can have most of the features that are present on other races to allow players to create their own unique aliens. They are also allowed to select four traits and have no mandatory pre-selected traits although some of the traits that other races have are not available, such as Mind Meld and Seduce.

Some features which the players can use are not actually available on current playable races, such as Ocampa and Vorta ears, and Jem'Hadar forehead details. This can allow players to create already existing Star Trek races like the aforesaid. Refer to the canon alien race build guide to learn how to recreate such iconic races.