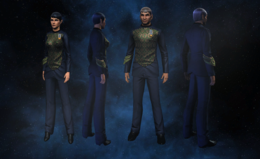 The 23rd Century Vulcan Ambassador Outfit is the outfit worn by Ambassador Sarek during the events of Journey to Babel and “Return to Babel”. It can be purchased from the C-Store either individually for 550

The 23rd Century Andorian Uniform contains pieces for the upper and lower body. These pieces can be used in Uniform and Off-Duty slots.