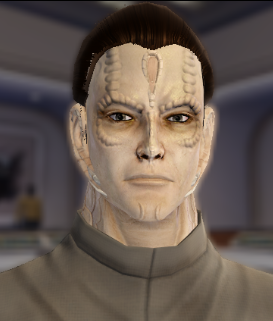 Star Trek Online features many different uniforms, spanning all three factions as well as cross-faction uniforms from many species in the Star Trek universe. Your Uniform can be edited on majority of hubs, such as Earth Spacedock, First City, and New Romulus Command.

Outfits can be bought from many places, the most common are the C-Store and Lobi Store, however, Fleet Holdings all have unique outfits purchasable at them.

The Romulan Republic do not have their own Starbase specific outfit or Temporal outfit, and instead use their allies outfit.

Some Reman outfits are unlocked by buying the Reman species, which costs 600

or by achieving Tier 5 in the New Romulus Reputation. They can only be used on Reman characters or Bridge Officers.

All Lobi Outfits except for Herald Heavy Armor, Undine Biotech Armor, and Hirogen Armor are tradeable.