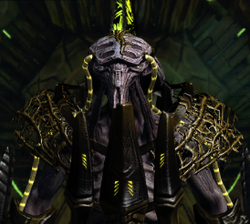 The Undine (known to the Borg as Species 8472) are a non-humanoid species indigenous to fluidic space, a parallel universe filled with organic fluid rather than vacuum. They are referred to by the Klingons as "qa'meH quv", meaning "replacers of honor with dishonor."

Their DNA is formed by a triple helix which makes them very resistant to almost all forms of biological attack, including Borg assimilation. They stand approximately 3 meters tall and have a tripedal structure (three legs).

The Borg consider them to be "the apex of biological evolution".

Little is known about Undine culture. They are quite xenophobic, and rule their part in fluidic space with force. They see all other creatures as inferior. 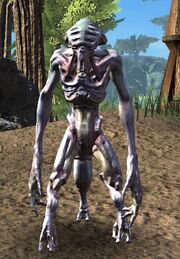 The Undine utilize organic technology comprised of the same material they themselves are made of. This makes their vessels unusually resilient against Borg attacks. They are also capable of shape-shifting using a form of genetic manipulation, and can switch between different forms at will. Undine ships use Fluidic Antiproton weapons.

The Undine seem to have some form of state and military hierarchy, but neither the name nor the constitution are known.