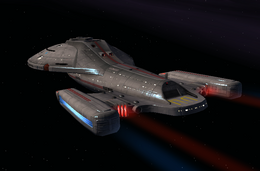 The U.S.S. Intrepid is an Intrepid-class Science Vessel in service to Starfleet in 2409. She was the first ship of her class.

In 2379, the Intrepid joined Battle Group Omega to face the I.R.W. Scimitar; however the Scimitar was destroyed before the Intrepid could join the battle. (Star Trek Nemesis)