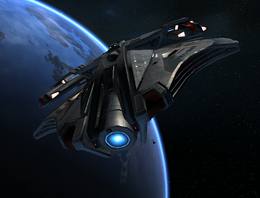 The U.S.S. Hermes is a Federation Escort in service to Starfleet in 2409.

She usually appears as a Hermes-class starship, but in the ship selection screen at Earth Spacedock she also appears as a Maelstrom-class.