The Tzenkethi Coalition is the official governing body of the Tzenkethi people. Ruled by an Autarch, the Coalition is a major political power in the Alpha Quadrant of the Milky Way. A territorial and aggressive species, Tzenkethi are known to be quite ruthless and devious in battle.

Tzenkethi ships are remarkably tough, with heavy shielding around their flank. They are weakest at their front, however they also have powerful front-facing weapons so going toe-to-toe with the Tzenkethi requires decent survivability while attacking from the front. Destabilizing Resonance Beam and other abilities or weapons which bypass or drain shields are also advised.

The Tzenkethi gain a buff when in close proximity to other Tzenkethi ships. For this reason, it is advisable not to use abilities such as Gravity Well which pulls ships together. Instead, Tractor Beam Repulsors (when used to push ships apart). However, their buff can also be compensated for by a sufficiently high DPS.

In the mid-24th century, Tzenkethi fought a war against the United Federation of Planets and the Klingon Empire, accusing them of taking worlds of high importance to the Coalition. Among the Starfleet starships involved in the conflict was the U.S.S. Okinawa, under the command of Captain Leyton, who had fought against a number of Tzenkethi raiders. Benjamin Sisko served as an executive officer aboard that vessel.

Warriors of the Klingon Empire also clashed with Tzenkethi forces. Rodek, who would later help lead the Alliance in the battle against Tzenkethi, remembered fighting them, claiming that the Coalition always prefered a more direct approach to battle as guile was not their strong suit. Martok took part in this conflict as well, and led a battle against the Coalition on Tzenketh III. His actions during the war, where he single-handedly killed many Tzenkethi warriors, made him known as the Butcher. ( “Brushfire”)

The might of Tzenkethi fleet instilled fear into many of the inhabitants of the Alpha Quadrant.

After their defeat, the Tzenkethi withdrew from the galaxy at large and avoided contact with the Federation for over half a century.

At some point, Dominion, afraid of the Hur'q reawakening, had Tzenkethi Admiral Aarn Tzen-Tarrak replaced to persuade the Autarch to take action against the upcoming Hur'q threat. With this information, Coalition launched a crusade against the Hur'q located a number of worlds throughout the Alpha Quadrant with hibernating pods of the Hur'q as well as their servitor race, which the Alliance would later mistake for germanium crystals. The Autarch also declared Autarchical Dictate 1219, ordering all Tzenkethi forces that any world with these crystals must be obliterated of all life. ( “Melting Pot”)

In 2399, at the very beginning of the Klingon-Gorn War, they made contact with the Lukari, a warp-capable species from a nearby system. During a diplomatic visit, they learned of Lukari's protomatter technology, which they experimented with in the past, but failed to stabilize. Aware this technology could help them in their conflict against the Drantzuli, Coalition officers ordered a Ferengi merchant, Madran, to steal this technology.

Coalition sterilized dozens of worlds in fear of the Hur'q return.

In 2410, an Alliance officer, alongside Lukari Concordium representative Kuumaarke, found evidence that the Tzenkethi were behind the obliteration of all life on a habitable world in the 20 Draconis System. The United Federation of Planets began looking into the matter at hand and decided to reestablish diplomatic ties, hoping this would prevent any unnecessary conflict. ( “Echoes of Light”)

However, further investigation by the Lukari revealed a dozens of other worlds throughout the Alpha Quadrant sterilized by the same type of weapon - a protomatter bomb. Rodek, now a General, was put in charge of a joint Alliance-Concordium operation to prevent the Coalition from inflicting more damage to innocent worlds.

A full-scale conflict between the Alliance and the Coalition began in late 2410, when L.S.S. Reskava, I.K.S. Kor and anonther Alliance vessel clashed with Tzenkethi over Khufano, another world they attempted to destroy. Such action was prevented, and the Lukari founded a Restoration Initiative tasked with returning life to attacked worlds. Meanwhile, the Alliance started battling the Tzenkethi on several fronts, attempting to prevent them from harvesting materials from the Gon'Cra System and taking control over Eta Serpentis System, which would give them access to a number of new sectors and vulnerable worlds. ( “Of Signs and Portents”)

Tzenkethi attempted to topple the Klingon Empire by allying with Torg.

A brief alliance with the Tzenkethi on Dranuur would be the first step to putting an end to Autarch's crusade.

Amongst the worlds targeted by the Coalition were Povin, Dynaj-4, Kzuuln-5, an Uuli homeworld, Atosee Prime, an Eohki homeworld and New Kentar's moon. Some Tzenkethi officers condemned these attacks, but were usually silenced before they had a chance to act. ( “Mirrors and Smoke”, “The Renegade's Regret”)

After inspecting several of the sterilized worlds, Kuumaarke realized that the Tzenkethi were targeting the germanium crystals, but failed to recognize their significance. The Tzenkethi continued improving their protomatter weapon design and succesfully developed an experimental projectile which could simply be launched from ship's torpedo tube.

With all the main forces in the Alpha and Beta quadrants now openly at war against them, the Coalition sought allies inside the Klingon Empire - House of Torg. In exchange for Martok, whom the Tzenkethi found guilty of massive massacre of their people during the last war, the Coalition was willing to give Torg one of their newly-designed protomatter projectiles which would help him take control over the Empire. In exchange for their help in bringing down J'mpok, Torg would pull the Empire out of the war. The deal went sideways, as Torg was killed by Martok, who was liberated by General Rodek and an Alliance officer. ( “Brushfire”)

After learning of the presence of Drantzuli "eggs" in the Dranuur System, Tzenkethi sent forces led by Aarn Tzen-Tarrak to take down Alliance ships in orbit and launch a protomatter torpedo at both the Dranuur and its moon to stop the Drantzuli from hatching. While the moon was sterilized, an Alliance officer managed to persuade a Tzenkethi Captain into stopping the extermination of the planet, ending further conflict. ( “Melting Pot”)

Aarn Tzen-Tarrak, who was incapacitated during the battle, continued his hostilities afterwards and launched several more attacks against the joint Lukari-Kentari colony, as well as several other systems throughout the Alpha Quadrant. ( “Dranuur Beach Assault”, “Red Alert: Tzenkethi”) 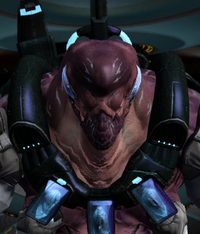 Admiral Tzen-Tarrak, the main patron of Autarch's crusade, was in fact a Changeling infiltrator.

Following multiple failed attempts of annihilating the Hur'q hibernation sites due to meddling from Alliance officers, the Tzenkethi decided to send a message to the Alliance, launching an attack on Bajor, a major Federation hub in the Alpha Quadrant. Thanks to the actions of a Tzenkethi renegade, the Alliance became aware of impending attack and managed to prepare a defense fleet.

While Deep Space Nine was damaged, Alliance forces took control of the Tzenkethi battle station and captured Admiral Tzen-Tarrak. Peace didn't last long, as Hur'q awakened from their thousand-year-long hibernation and started wreaking havoc across the quadrant, sending a large invasion force to the Bajor System. ( “Scylla and Charybdis”)

Tzenkethi forces briefly allied with their former enemies and helped fight the Hur'q threat, but it wasn't long before Tzen-Tarrak, aided by Jem'Hadar, escaped Alliance custody and ordered the Coalition to retreat. ( “Turn the Tide”)

Failure to stop the Hur'q threat tarnished the Autarch's reputation in the Coalition. Whispers of corruption in the highest ranks and a possible coup reached Federation intelligence some time after the battle over Bajor. During the mission to Havas-Kul, the Alliance learned that the Dominion had infiltrated the Coalition at some point in time and that Tzen-Tarrak himself was replaced by Female Changeling, leader of the Founders. ( “Quark's Lucky Seven”, “Tenebris Torquent”)

A militant and highly intelligent species, Tzenkethi are a force that can match any member of the Alliance.

Tzenkethi ground forces are able to keep their enemies on their toes by being outfitted with technology that allows them to potentially deploy multiple types of drones, or fire a grenade launcher with multiple firing modes.

Proud, higher ranking Tzenkethi are outfitted with the best technology available. However, if a Tzenkethi officer feels technology isn’t getting the job done, he will throw down his weapons and use his natural might to finish the battle.

Tzenkethi vessels are highly resilient, and the strength of their shields is tough to rival. However, no design is without its weakness. In order for the Tzenkethi to accommodate the strength of weaponry they desired, they needed to sacrifice their forward-facing shield power. In addition, this also meant that they needed to localize their weaponry to keep efficiency up. This resulted in their primary means of damage to be front-facing as well. To make up for the weapon loadout disparity, they equipped all of their ships with familiar mobile capabilities, such as Lock Trajectory.

Tzenkethi Cruisers are able to make other vessels in the fleet operate more efficiently when they are in close proximity by extending a Processing Beam.

Higher rank Tzenkethi ships come equipped with long-range protomatter-laced weaponry. While these weapons can’t lock on to a ship post-launch, they are extremely potent to an unaware target. As an additional benefit to the protomatter aspect of the weaponry and Tzenkethi technology, the explosions leave behind volatile radioactive clouds. These clouds are extremely dangerous to non-Tzenkethi ships. However, Tzenkethi have adapted their technology to reuse and draw in protomatter; this provides their ships with increased restorative properties and strengthened defensive capabilities.