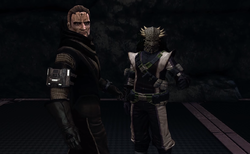 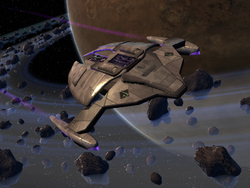 The True Way Alliance (also referred to as the True Way or simply the True) is a Cardassian terrorist organization operating independently from the Cardassian Union. They cooperate with Laas' New Link as well as with the Alpha Jem'Hadar, and also forge an alliance with the Terran Empire of the Mirror Universe.

The roots of the True Way movement go back at least to 2372, when the Cardassian dissident movement took control of the government and reforms the Cardassian Union into a more peaceful society. The True Way was formed in response, and called for the return of the aggressive military regime. They staged two terrorist attacks at Deep Space Nine, bombing the runabout USS Orinoco and attempting to assassinate Bajoran First Minister Shakaar. After Cardassia joined the Dominion in 2373, the True Way was disbanded for the time being. In 2375, the Dominion War ended with the defeat of the Dominion and Cardassian forces.

Seven years after the war, 472 Cardassians wanted by the Bajorans for war crimes disappeared from Cardassia Prime. A year later, the True Way resurfaced to protest the reemergence of the Oralian religious group. In 2387, the Alpha Jem'Hadar, an abandoned group of Jem'Hadar that had originally been bred in the Alpha Quadrant to fight for the Dominion during the war, took control of an abandoned Ketracel-White facility on Devos II. As they did not seem to be aggressive, the Federation tolerated their presence.

In 2389, Gul Madred aquired the rights to several mineral rich planetoids and began building a large mining operation in the Septimus System. The following year, Madred and his followers, abusing the expansions in freedom of speech and assembly established by the Detapa Council, organized rallies promoting a return to the "true" ways of the Cardassian Union, thereby becoming the de facto leader of the True Way. By 2392, many former Cardassian military officers were employed in Madred's mining facilities in the Septimus System, which, by that time, had grown enough to export their exploits, e.g., to recuperating Romulan colonies. Claiming that the Cardassian Defense Force was unable to protect his mines from raiders, Gul Madred contacted Lamat'Ukan, leader of the Alpha Jem'Hadar, in 2393 in order to hire a private security force against the protest of the Detapa Council.

In 2398, Laas arrived in the Devos system with two other unknown Changelings. In 2402, Cardassian Intelligence confirmed a six years old suspicion that at least 75 Galor Class-warships missing since the end of the Dominion War were most likely in True Way possession. By 2409, Lamat'Ukan's Alpha Jem'Hadar appear to serve Laas' "New Link". Together with the True Way, they now wage a campaign of destabilization and terror in Cardassian space. 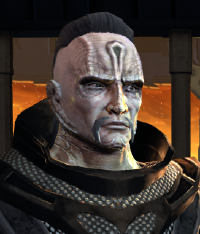 Gul Kardek of the True Way is in fact a Changeling

Laas and his New Link

Most of the True Way's military equipment are stolen Cardassian military assets from the aftermath of the Dominion War. It also uses Jem'Hadar vessels.