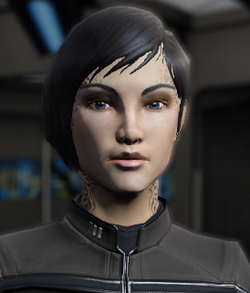 A Trill commander in Starfleet

This article refers to the Trill species. You may instead be looking for the planet Trill.

Trill are humanoid lifeforms native to their home world Trill. Trill are a playable race in Star Trek Online for the Federation. The game mechanics treat Joined Trill, who carry a Trill symbiont, as a separate race.

The Trill are very similar to Humans except for their spots, which are mostly seen on the sides of their heads. These spots run from their heads down their shoulders and carry on down their torso and legs to the feet. 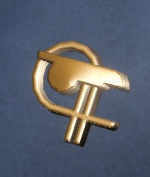 The Trill symbol as a comm badge

The logo of the Trill Symbiosis Commission

The Trill race consists of both hosts and symbionts. The Trill symbiont is a creature which is implanted into a Trill host, and subsequently joins with it, but this "race" consists entirely of unjoined humanoid Trill.

It is mentioned in "Uneasy Allies" that Trill physiology is very resistant towards parasites, allowing them to survive Bluegill possession, as what happened to Kyla VanZyl. Joined Trills are said to be immune thanks to their Symbiont.