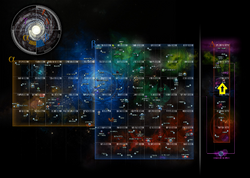 The Trakia System is a system located in the Kotaba Sector of the Delta Quadrant.

A binary star system with a yellow Class G star twinned with much larger Class F white star, the Trakia system has six planets and more than 30 moons. Trakia Prime is a Class Y world. Because of this, the system gets little traffic. Hirogen hunters have been sighted in the area, and it is possible that they are using the remote system as a base of operations.