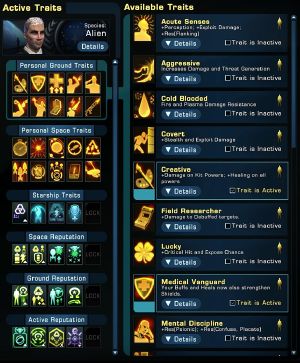 The traits tab of the character menu of an Alien (i.e., with a total of 20 instead of 18 Personal traits). The non-customizable racial trait can be viewed by clicking the "Details" button next to the character portrait (Aliens do not have an innate species-trait). The "Personal Traits" may be changed at any time. Reputation and other traits are below.

Traits add extra bonuses to attributes or abilities of your game character. Most traits are passive bonuses, but some also include a special ability your character can activate. Each passive trait either gives a bonus for ground or for space combat. Traits therefore have a direct influence on the overall strengths of your character and, along with your skills and Captain Specializations, are a key to adapting your character to your play style. Unlike skills, however, traits can be reassigned in-game without cost anywhere within social hubs or in sector space.

A level 65 character has slots for the following amount of traits:

Each playable race (except for Aliens) has an innate, i.e., built-in and unchangeable, trait. Not occupying any trait slot, race-specific innate traits are usually a combination of two or three Personal traits (which are then no longer among the selectable trait pool for a given species).