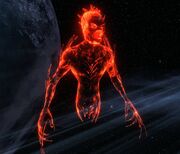 A Tortured Soul in space.

Tortured Souls are frightful spectral Fek'Ihri that can survive in the vacuum of space. They are fighter-like space mobs, roughly equivalent to a S'Kul Fighter. They are released from Kar'Fi Battle Carriers, and fly very rapidly towards their targets to attack them with their claws. Though they lack ranged weapons, these Fek'Ihri are not to be underestimated, as they are released in large packs and can pass straight through shields and claw directly at starship hulls.

The Tortured Soul does not display any abilities