Torpedo Launchers are a type of ship weapon. They fire projectiles that deal heavy kinetic damage in a 90° arc. Shields drastically reduce the effects of kinetic damage. They are not affected by Weapon Power. 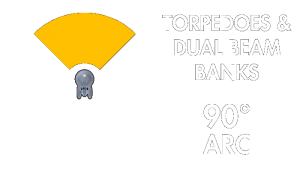 90° Weapon Arc for the Torpedo Launcher

There are several types of Torpedo Launcher available in the game which are listed below. Each type of torpedo holds a different bonus (often referred to as a proc). The damage done by these weapons is modified by several Captain skills from the skill tables and also by other means such as Tactical Consoles. The baseline damage is dependant on the meta-level of the launcher and its rarity. For more information on the base damage done by torpedo launcher weapons, see the respective weapon type articles.

Special Crafted Modifiers: These modifiers can appear once on crafted Torpedo Launcher of Rare quality and higher:

Shields have a 75% Kinetic damage reduction, affecting all torpedoes.
All values given are for common weapons. There is greater damage with increasing rarity.