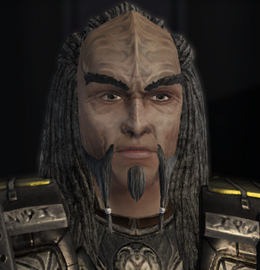 Loresinger Tiran is a male Klingon located on Qo'noS near the Great Hall on First City. He provides flavor text and history.

Tiran provides information about Kahless and the first Bat'leth. Further information is provided by his daughter, B'Alea, opposite him.


Kahless is the greatest warrior the Klingons have ever known.

He has never known defeat. He defeated the tyrant Molor. He united our people and founded our Empire. He gave us the rules of honor.


Kahless is what we all strive to be.
A story of Kahless


Ages ago, Kahless was in the city of Quin'lat. A fierce storm was approaching, and all of the residents of the city took refuge inside Quin'lat's strong stone wall.

Everyone but one man, who stayed outside with nothing but his blade to protect him.

Kahless asked this man why he did not seek shelter, and the man said that he would not. He would stand in the storm and force it to respect him.

Kahless respected his choice, and went inside Quin'lat's walls to await the breaking of dawn.


The storm came, and the man was killed. And Kahless said, "The wind does not respect a fool."
Another story of Kahless


When Kahless fell in love with the Lady Lukara, he offered her gifts of precious jewels and wrote her words of great beauty.

She rejected his offerings.

Desparing of ever winning her love, Kahless went to the city of Qam-Chee, where the Lady Lukara was residing.

It was there that the soldiers of the tyrant Molor attacked. The Soldiers of the city's garrison fled, leaving Kahless and Lukara to face 500 warriors alone.

They defeated Molor's forces and saved the day.


Then, having seen the fire in his hear and the skill of his blade, Lukara gave Kahless her love.
The first bat'leth created by Kahless


The sword of Kahless' father was lost. Kahless' treacherous brother, Morath, had thrown it into the sea.

Kahless wept, for the sword was all he had left of his father. His tears filled the ocean.

When his mourning was done, Kahless went into the mountains. he walked alone into the deepest wilderness, and did not stop until he reached the Kri'stak Volcano, where no Klingon had ever been.

At the volcano, Kahless cut a lock of his hair and plunged it into the river of molten rock. The hair burned, but then Kahless thrust it into the lake of Lusor and twisted it into a sword.


That was the first bat'leth. The sword of honor.
Retrieved from "https://sto.gamepedia.com/Tiran?oldid=383379"
Categories: