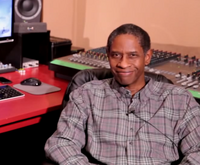 Tim Russ during a promotional interview for Star Trek Online

Tim Russ is an American actor, director, screenwriter and musician known for portraying Tuvok on Star Trek: Voyager, a role he has reprised in Star Trek Online.

Tim Russ was born on June 22, 1956. Russ began his acting career in the 1980s. As a life-long Star Trek fan he auditioned for the role of Geordi La Forge on Star Trek: The Next Generation and subsequently got a minor role in one episode of the show in 1993, as well as roles in Star Trek: Deep Space Nine and Star Trek: Generations. From 1995 to 2001 Russ appeared on Star Trek: Voyager as Tuvok, the mirror-counterpart of whom he also portrayed in an episode of Deep Space Nine.

After finishing Voyager, Tim Russ has retained many ties to the Star Trek franchise. Notably, he has appearead in and directed the unofficial mini-series Star Trek: Of Gods and Men, which also featured Chase Masterson and Garrett Wang.

In recent years, Russ has continued his acting career with appearances on television shows and movies, including a recurring role on Samantha Who?. He has also voiced characters for cartoons and video games and has gained fame as a producer and director of public service ads, one of which gained him an Emmy Award nomination in 2014.

Tim Russ has appeared in-game since the 4th anniversary mission “A Step Between Stars” in January 2014. Since then he has returned for additional missions, most prominently for the expansion Delta Rising. His character, Tuvok, has risen to the rank of Rear Admiral and now commands the U.S.S. Voyager.