Lower tiers are intended for a specific rank; for example, Tier 2 starship becomes playable for Lieutenant Commander and while it can be used by Commanders, it ceases to become competitive against enemies encountered at the Commander level and above. Tier 5-U, and to a greater extent, Tier 6 starships level with the player after beyond their initial rank.

Tier 5 and 6 starships have ships that are slightly more powerful than regular starships of that tier. This includes all "Fleet" starships and premium starships obtained from places such as the Lobi Store or a Lock Box. 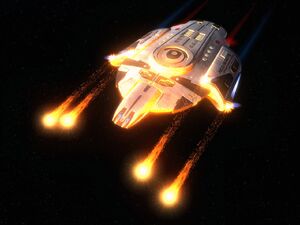 and one ship can be earned via a mission reward.

Some ships available for dilithium do not have "Refit" in the name but have the same enhanced stats. These are the:

These starships were previously available in the Zen Store as account unlocks. Players who obtained them from there before they were removed retain account-wide access to them.

The Prototype Walker Light Exploration Cruiser is a unique starship which scales through levels 1 to 4 with the player (in a similar manner to the Tier 6 system explained below, but at a lower level.

Small Craft are Tier 1 ships such as shuttlecraft and fighters. Compared to full-sized starships, they have significantly less hull, shields, weapons, bridge officers, consoles, and crew. However, these craft have very high manoeuvrability and turn rate.

. There are also several Retrofit versions of lower-tier ships available for 200,000 fleet credits

, provided you are part of a fleet with the appropriate holdings available.

As with tiers 1-4, there are also Refit or Retrofit versions available from the C-Store that cost Zen

. These are often improved in some way, but do not have the enhanced bridge officer ability or console slots that the tier 1-4 refits do, and thus they are not a separate "Tier 5 Refit" category. The ships available at the C-Store also come with a special Universal Console.

Some ships have a slightly different Mirror Universe version available. These ships have the same hull-related stats as the Prime Universe model (hull strength, shield strength, power levels, flight speed, turn rate, inertia), but a different bridge officer and/or console layout. They also come with a Mirror Universe skin option. They can be obtained with a chance of ~2% from Lockboxes (or the Exchange as they are tradeable). Mirror ships cannot be upgraded to Tier 5-U (see below). There is also a Tier 6 Mirror Universe Guardian Cruiser.

Fleet-grade starships include those prefixed with "Fleet" and certain premium starships.

"Fleet" ships are purchased at a shipyard for 20,000 fleet credits

and 4 or 5 Fleet Ship Modules

The fleet versions of a few T5 starships are not a simple direct upgrade of 10% more hull, 10% more shields, and an additional console: another aspect of the ship has changed, such as bridge officer seating. These are also noted on the Fleet Ship Module page. See the individual ship pages to compare.

All Fleet and Fleet-grade ships may be upgraded to Tier 5-U (see below).

If a player has used a Starship Upgrade Requisition to unlock the T5U upgrade on the C-Store Retrofit version of a ship, this will also apply to a matching T5U Fleet ship at no additional cost. 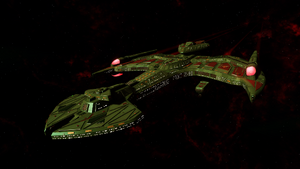 A T5 Fleet Negh'Var Heavy Battle Cruiser, which can be upgraded to T5-U.

Prior to the release of Tier 6 starships, Tier 5 were the sole endgame ships available. To allow them to remain competitive with the newly released Tier 6 ships, it is possible to upgrade a Tier 5 to a Tier 5-U (T5-U) using an starship upgrade token, which costs 700

Most C-Store Tier 5 ships now have Tier 6 versions available, and so considering the cost of the ship and an upgrade token (either 2700

) instead. T5-U Ships are endgame-capable by all means, but T6 ships simply hold an advantage over them.

Upgraded ships receive bonus to hull, an extra console seat, access to Starship Mastery passive trait system and a new ship material. The Starship Mastery system for Tier 5 covers 4 levels of passive bonuses. Compared to a Tier 6 version of the same hull, the Tier 5-U version will have the same hull strength and other hull-related stats, and console slots, but one fewer bridge officer ability, no bridge officer specialization seating, and no Starship Trait, which are exclusive to Tier 6 starships.

Tier 5-U Upgrades are account-wide: once a ship is upgraded to Tier 5-U on any character, all other characters on that account with access that ship may upgrade to Tier 5-U at no cost. This includes ships that are themselves not account-wide, e.g. if a Fleet Negh'Var Heavy Battle Cruiser is upgraded on one character, the other characters with the same ship can get it to Tier 5-U, but they will have to purchase the ship first. Additionally, if there exists both a fleet and non-fleet version of a C-Store ship, a single upgrade requisition will apply to both versions.

Most ships acquired through a Lockbox, Lobi, a promotional box or an event are free to upgrade without buying an upgrade token, specifically those released prior to the ability to upgrade. Frequently, when Tier 5 ships are on sale in the c-store, upgrade tokens are included for free. See the Starship Upgrade Requisition page for a list of all eligible ships, whether the upgrade is free or costs a token, and what console they gain upon being upgraded. As a general rule, T5-U ships can only have 5 of a given type of console if it matches their Commander Bridge Officer seating, though a few exceptions exist.

Tier 5-U starships, including their fleet variants, sees an increase in hull from their lowest playable rank - level 40 - through to level 65 as the player increases in rank.

Note that Tier 5 ships that are not T5-U have this level 40 value for their hull, regardless of your level, even if that ship can only be claimed from level 50. Most C-Store T5-U ships can only be claimed from level 50; for these ships, their hull will simply jump 15% right away upon upgrading to Tier 5-U. For the Fleet variants of any hull-scaling ships, simply increase the final hull strength by 10%, as normal. 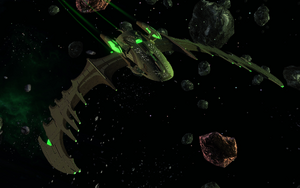 A Flambard Science Dreadnought Warbird (T6) from the C-store

The current highest tier in the game, Tier 6 ships are a moderate improvement over Tier 5 starships, featuring additional console slots, bridge officer abilities, and scaling hull strength. They also come with a unique ship costume, a unique Universal Console, an unlockable Trait, and can be played following the tutorial all the way to Level 65.

. Outside the C-Store, they can be found in Lock Boxes, events and other promotions.

Tier 6 ships can be played from level 1[1] (although some other restrictions on specific ships may apply), with its capabilities scaling with the player. Weapon slots, consoles slots, hull and shield stats increase as the player increases in rank until level 50. Exactly what is unlocked at what level depends on the ship's capabilities at level 50. In addition, all equipment on a Tier 6 ship when it is acquired levels with the player until level 50.

The below tables outline at what level each slot is aquired.

Shield capacity scales, although it can not be reliably projected.

As with Tier 5, Tier 6 Fleet ships are purchased at a shipyard for 20,000 fleet credits