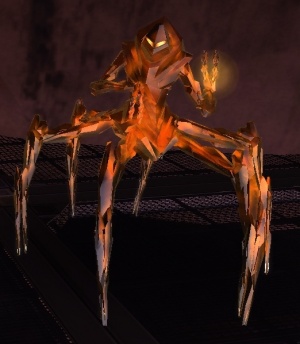 The Tholian Lieutenant is the second lowest rank in the hierarchy of the Tholian Assembly, senior only to Tholian Ensigns. The Lieutenant has two radiation weapons and, unlike the Ensigns, has personal shields. Sometimes when a Lieutenant is defeated it can have a radiation breach, which deals powerful kinetic damage.

Tholian Lieutenants appear in the Tholian Incursion ground map missions of the Neutral Zone: They are common troops encountered by Starfleet and the KDF when the Tholians occupy Nukara Prime to access the interphasic rifts there.