A Terran Odyssey-class Dreadnought beneath the surface of Nukara Prime.

A force field protects the Base Camp from the harsh environmental conditions. 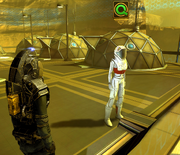 The Base Camp Commander gives all exterior and zone wide missions.

The Tholian Incursion (also called Tholian Invasion) is a level-50 adventure zone on the class-Y planet Nukara Prime in the Nukara System which is located in the Boreth Sector of the Beta Quadrant. It requires players of all factions to counter an invasion attempt by the Tholian Assembly and contains several missions of different difficulties separated into an exterior and an interior subzone. The hostile environment of Nukara Prime also requires the player to wear an Environmental Suit.

Leading new captains to the Nukara System, the mission “Hot Lead” is given as soon as level 50 players enter the Boreth or surrounding sectors.

, a Tholian Equipment Requisition, and have varying cooldowns based on difficulty. While the Bonus Marks Event is active, the amount of marks rewarded by these missions is increased. Both [Hard] missions are accessed via the PvE Queue.

Only one [Zone Wide] mission is available at a time, but it has no cooldown while it is available.