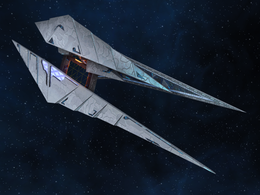 The Tholian Iktomi is a Tier 6 Science Vessel which may be flown by characters of any faction. This starship can be used from any level upon completion of the tutorial experience. As you level up, this ship gains additional hull, weapon slots, and console slots.

. The boxed ship is not bound and so may be traded to other players or bought and sold on the Exchange for energy credits under the name [Special Requisition Pack - Tholian Iktomi [T6]].

Recent conflicts with the Tholian Assembly have resulted in a handful of captured Tholian vessels. Tholian technology is very different from other Alpha Quadrant powers, and these vessels are prized as opportunities for study as well as new combat vessels. The Tholians' natural environment is hostile to most humanoids, and their ship interiors were designed to support that environment. Much effort has gone into simply modifying the interiors to let personnel board these vessels without environmental suits.

Retrofitting of the Tholian Iktomi-class likewise started in a redesign of the lattice structures to compensate for required changes elsewhere on the starship. On the Iktomi-class, the resulting improvements were most visible in improved communication pathing and better structural integrity. Those optimizations in turn allowed for higher limiters on the impulse engines and freed up more power for the ship’s shield generators.

To ensure the new experimental optimizations, re-designs, and remaining Tholian technology worked together, a part of the team performed incredible feats and set up an increased number of safeguards around the ship. As a result of this work and the safeguards put in place, the ship has become a much more resilient testbed for field experiments. At the same time, another part of the team worked on improving direct control capabilities. This work, starting from the bridge and reaching all across the ship, significantly increased the effectiveness of the ship’s communication and fire control centers, making it more of a commanding presence on the battlefield.

While performing this work and experimentation on such a distinctly alien ship, the team made significant use of photonic technology, both to safely explore areas of the ship that might still have a hostile environment, and to augment the team’s relatively small size. Continuous minor improvements made during this process, combined with the learning acquired from a complete bridge overhaul, have significantly increased the utility of the Photonic Officer on starship bridges. While these upgrades are most notable on ships with similar bridge configurations to the Tholian Iktomi, the applications of them are general enough to be noticeable on any starship.

This ability is part of the Tholian Technologies Set, which also includes [Console - Universal - Enhanced Tholian Tetryon Grid] and [Console - Universal - Tholian Web Cannon] obtainable with Tholian Jorogumo Carrier (T6) and Tholian Tarantula Dreadnought Cruiser (T6), but also equippable on the Tholian Iktomi. For each console added after the first, an additional passive bonus is unlocked.

The Tholian Iktomi comes equipped with [Thermionic Torpedo Launcher] which has a chance to drain weapon and engine power from the targeted foe.

These starships come with standard equipment and weapons of the lowest mark available at the ship's minimum rank. The items provided are appropriate to the type of vessel and its related playing style.